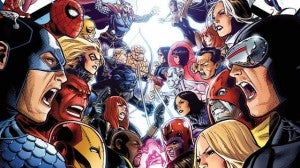 In a series of articles published today, Bleeding Cool claims to have uncovered a series of creative moves that would change the face of most of Marvel Comics' biggest franchises. While still technically rumors, creators and fans have taken to Twitter, discussing the changes as though they're essentially a done deal. Of course, the last time Bleeding Cool ran with a story of creative changes this sweeping, The New 52 was announced...!

Following a story they ran yesterday that suggested Marvel was headed for a major creative shakeup, the news and rumor site was inundated with tips today, apparently, allowing them to run a handful of stories as essentially confirmed.

The first rumor, and one that doesn't so much require a creative "change" as it does announce a new title, is that Rick Remender and Jeremy Opena will launch an Avengers comic--titled Astonishing Avengers and meant to stand shoulder-to-shoulder with Astonishing X-Men and Astonishing Spider-Man.

The second rumor has it that Matt Fraction and Salvador Larocca, who have been working together on Iron Man for sometime now, will be replaced on that title by Kieron Gillen and Greg Land, which will clear their schedule to move over to Fantastic Four when Jonathan Hickman leaves the book to take over The Avengers with Esad Ribic (the day's third rumor).

There's still no movement on those persistent rumors that Brian Michael Bendis is leaving The Avengers to take over Marvel cosmic, although another rumor (which even Bleeding Cool is somewhat more skeptical of than the others) has him taking over two X-Men titles in the near future: Uncanny X-Men and a relaunched X-Men with a new #1 for Bendis and an unnamed artist. That doesn't, according to the story, preclude him building the X-Men into a grand cosmic plan but it is a new wrinkle on an old rumor that Bendis was likely to take on the X-Men following the events of Avengers vs. X-Men.

The only thing left, then, from yesterday's series of rumors is the question of Mark Waid taking over Avengers Assemble, the movie-friendly version of the team, currently guest-starring the Guardians of the Galaxy as they face off against Thanos.