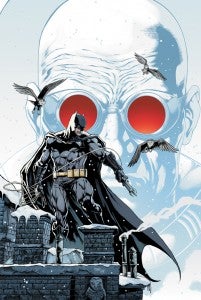 Following on the heels of the announcements of Teen Titans and Animal Man oversized issues that bring the concept of annuals to the New 52, DC announced late this afternoon that Batman Annual #1 will come out in May and introduce the classic bat-villain Mr. Freeze to the new DC Universe. The post announced that the story will be written by series writer Scott Snyder, along with James Tynion IV, with art by Jay Fabok. "Mr. Freeze is a character full of pathos and tragedy and at the end of the day, he's one of Batman's deadliest," Snyder told The Source. "So as you can imagine, I'm very excited to be able to do a story that establishes him in the new DCU, with rising stars James Tynion IV and Jay Fabok. This will be tale that really digs into Freeze's psyche, explaining his connection to the Court of Owls in the present, and exploring dark secrets about his past." The Court of Owls has been the central antagonist since Snyder's Batman run began in September and will headline a crossover event that ties into all of the Gotham-based titles. The most recent issue, Batman #5, will go back to press after selling out at Diamond Comics Distributors, DC announced today. Just yesterday, DC told Comic Book Resources that Batman #5 was January's top seller through its ComiXology app.