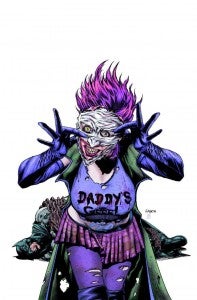 Who is the Joker's Daughter?

We'll find out soon enough, as she's one of four villains set to appear in Batman: The Dark Knight titles during villains month, rounding out a month that will also feature The Ventriloquist, Mr. Freeze and Clayface, according to DC Comics's September solicitations.

Of course, DC have previously said that there won't be new characters debuting in the Villain's Month books, so don't be too surprised if you see her between now and then in Catwoman, as we'd previously guessed, or somewhere else.

We're still guessing Catwoman, though, given that The Joker's Daughter solicitation mentions the Gotham Underground and is written by Ann Nocenti.

Batman: The Dark Knight #23.1 will be written by Gail Simone and feature art by Derlis Santacruz. The story will revolve around the newly-retooled Ventriloquist, who has been appearing in Simone's Batgirl title.

Jason Fabok will provide the lenticular covers on The Joker's Daughter and Patrick Gleason will draw The Ventriloquist while Guillem March will do so on the other two titles in this batch.[gallery ids="51876,51976,51977"]

X-Men: The Animated Series Stars Reflect on the Show’s Impact

Scream: Resurrection TV Series Being Broadcast on VH1 This Friday