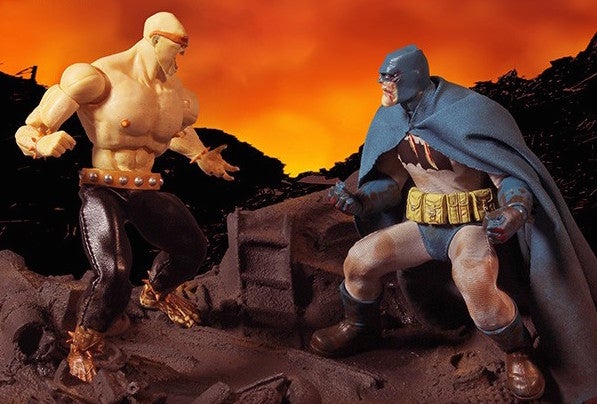 Oh, pardon us. We were just getting ready for all the awesome Batman: TheDark Knight Returns re-enactments we'll soon have with these grim 'n gritty Batman and Mutant Leader action figures from Mezco Toys.

Bringing Frank Miller's iconic junkyard battle from The Dark Knight Triumphant to bone-breaking reality, the 6.5" battle-damaged Batman and Mutant leader might be the best thing to happen to The Dark Knight Returns since, well, The Dark Knight Returns. Both figures are recreated in meticulous detail—just look at the blood seeping through Batman's tights—feature interchangeable hands, and come with accessories--like mud!

And when you ball with Batman, you ball hard. Which is why the figures also come with a junkyard base to set the figures in. After all—it's not every day that a middle-aged Batman gets his groove back.

Getting your hands on these figures, however, may be harder than the Mutant Leaders mysteriously pointy nipples. Running at $150, the set won't be available until this year's San Diego Comic Con at a limited quantity of 1,000.

If you want to get a jump on them now, you can place a pre-order at Mezco's site. And be sure to check out the full gallery below, where Mezco actually recreated particular panels from the melee. Hardcore.

Forget Batman V. Superman: This is brawl we want to see on the big screen.