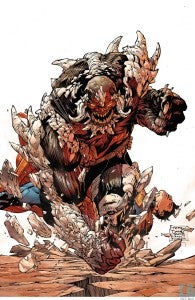 As part of his recent interview with Cosmic Booknews about DC Comics's "Villains Month" titles, Batman/Superman writer Greg Pak revealed a few details about Doomsday #1 - and by way of doing so revealed that the New 52 will retain much of the core of the character's backstory.

"We'll hear about Doomsday from three different characters during the course of the story. Readers will have to judge for themselves whose stories are the most reliable. But yes, this is a Doomsday that's haunted Krypton in various ways for many, many years," explained Pak, answering a question as to whether Doomsday would still be a creature of myth as he was in past incarnations.

If the structure of that issue sounds familiar it's because it's not dissimilar to what they did in 1995. Back then, DC did a themed series of "Year One" annuals, retooling their characters' backstories a little bit for the post-Zero Hour DC Universe and updating things that, by and large, hadn't been touched since a decade before when the Crisis on Infinite Earths reset everything.

Doomsday, surprisingly, got his own annual rather than being a part of Superman's--and DC took advantage of that fact by crafting an issue where a number of different backstories were given for Doomsday from a number of different sources. Among them, as I recall from years ago, was a story about Doomsday encountering members of the Green Lantern Corps as well as a number of stories about his early encounters following the revelation of his origins in Superman/Doomday: Hunter/Prey. The annual in question was reprinted in 2010 as part of the 100-page spectacular "DC Comics Presents" format, so you can get it digitally. That version comes with a bonus Doomsday story from Jeph Loeb's Superman run.