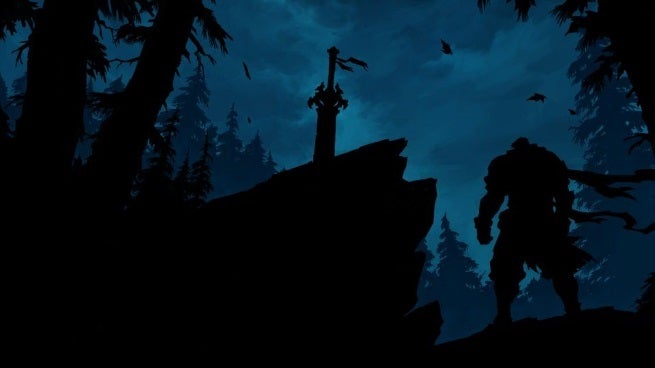 After a 14 year hiatus, Joe Madureira's Battle Chasers is returning, both as a comic and as a video game.

On Tuesday, Madureira posted a vague teaser for a new project he was working on with his new video game studio, Airship Syndicate. Many fans speculated that it was related to the comic that put Madureira's name on the map, and that speculation was proved correct in an announcement made Thursday morning.

Battle Chasers had a notoriously sporadic shipping, and Madureira abandoned the project after nine issues to pursue a career in video game design, occasionally working on a Marvel Comics title like The Ultimates 3 or Inhuman.

Madureira created Darksiders for THQ while working at Vigil Games, but after both companies folded he formed Airship Syndicate with several ex-Vigil employees. Now, bringing Battle Chasers back.

On the comic book side of things, Madureira couldn't yet reveal the publisher or release date of the new series, but says it will likely run in three issue arcs, with the first one finally wrapping up the story he left unfinished in 2001.

"I partially just want to update it," he tells Polygon. "I think it's going to get a visual overhaul too. My art style and storytelling style, everything's sort of changed and evolved over the years."

While Airship Syndicate was not ready to go into details about the Battle Chasers video game, they did say that it will be an RPG that lets players control a party consisting of characters Garrison, Gully and Calibretto from the original Battle Chasers comic. While the gameplay different than Darksiders, Airship Syndicate is looking to infuse it with a similar sense of adventure.

"Even though the game mechanically is going to be very different from Darksiders, I think we're still really going to be doing everything we can to make sure that the dungeon exploration side of the game is soaked with lots of fun adventurous elements," Airship Sydnicate (and Vigil Games) co-founder Ryan Stefanelli say.

The game is still in its earliest stages, with Airship Syndicate considering whether they want to attempt to fund the game through traditional channels, or attempt a Kickstarter, but the studio is aiming for a release on both PC and console, and considering a tablet release as well.

Check out concept art for the game in the gallery below.

Battle Chasers Returns As A Video Game And Comic Series