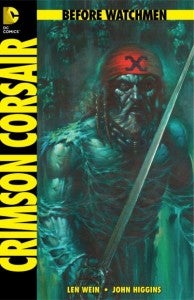 The much rumored Watchmen prequel became official today as DC Comics announced Before Watchmen. The mini-series will include all-new stories by some of the top writers and artists in the business. In all there will be seven titles to fall under the banner of Before Watchmen. Exact dates of publication for the various titles was not given, but DC Comics did reveal the min-series was coming this summer. In a joint quote Entertainment Co-Publishers Dan DiDio and Jim Lee said, "It's our responsibility as publishers to find new ways to keep all of our characters relevant. After twenty five years, the Watchmen are classic characters whose time has come for new stories to be told. We sought out the best writers and artists in the industry to build on the complex mythology of the original." Here is a breakdown of the Before Watchmen series and the creators involved. RORSCHACH (4 issues) – Writer: Brian Azzarello. Artist: Lee Bermejo MINUTEMEN (6 issues) – Writer/Artist: Darwyn Cooke COMEDIAN (6 issues) – Writer: Brian Azzarello. Artist: J.G. Jones DR. MANHATTAN (4 issues) – Writer: J. Michael Straczynski. Artist: Adam Hughes NITE OWL (4 issues) – Writer: J. Michael Straczynski. Artists: Andy and Joe Kubert OZYMANDIAS (6 issues) – Writer: Len Wein. Artist: Jae Lee SILK SPECTRE (4 issues) – Writer: Darwyn Cooke. Artist: Amanda Conner To give fans something to look forward to each week during the summer, apparently a new issue will be released each week. To tie all the various titles together, there will be a two-page back-up story called CURSE OF THE CRIMSON CORSAIR in each issue. The CURSE OF THE CRIMSON CORSAIR is written by original series editor Len Wein and with art by original series colorist John Higgins. In addition, there will be a single issue, BEFORE WATCHMEN: EPILOGUE, which will include the work of various writers and artists, along with a CRIMSON CORSAIR story by Len Wein and John Higgins. Original WATCHMEN artist and co-creator Dave Gibbons even weighed in with a comment. "The original series of WATCHMEN is the complete story that Alan Moore and I wanted to tell. However, I appreciate DC's reasons for this initiative and the wish of the artists and writers involved to pay tribute to our work. May these new additions have the success they desire," said Gibbons.

Before Watchmen Announced By DC Comics

What Cowboy Bebop Needs to Fix for Season 2