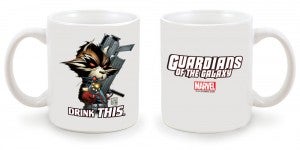 It's been widely speculated for quite some time that Brian Michael Bendis, recently retired from writing The Avengers, would move onto the comic book equivalent of Marvel's next big superhero team film, Guardians of the Galaxy. After all, he's been featuring them in his Avengers Assemble monthly series for a while now, facing off against Thanos, whose creator confirmed he will appear as a villain in both Guardians of the Galaxy and Avengers 2. While nothing of the sort has yet been announced for Marvel NOW!, a recently-released teaser image from artist Steve McNiven appears to be from a new Guardians series. And last night? Brian Michael Bendis was talking about the series on Twitter, using cryptic "I-know-something-you-don't-know" language.

He just posted to his Tumblr, along with the image above, "Huh!?? Now why would Marvel go to all the trouble to create guardians of the galaxy mugs with exclusive Joe Quesada artwork for New York Comic-Con??" Why, indeed?

Bendis Teases Guardians of the Galaxy