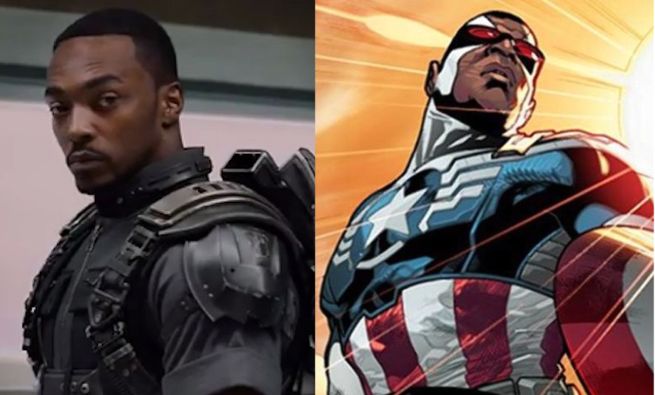 Marvel Comics recently announced that, with the onset of the Avengers NOW! initiative, Sam Wilson, a.k.a. The Falcon, would be taking over as Captain Americafor Steve Rogers.

This has led some fans to speculate as to whether or not Marvel might be preparing fans to see Anthony Mackie, who played the Falcon in Captain America: The Winter Soldier, take over as Captain America for Chris Evans. n Marvel Studios' cinematic universe. Evans has played Steve Rogers in three films already, and has a contract with Marvel for six.

SFX Magazine caught up with Christopher Markus and Stephen McFeeley, screenwriters on the Captain America film series, and asked them if Sam Wilson becoming Captain America was something that could potentially happen in the films. The writers were reserved and skeptical about the idea.

"I think the movies can accommodate almost anything, if there's a need," said Markus. "I think there is a much greater need to shake things up in the comics because that's a narrative that's been going on for 60 or 70 years, so you're going to wind up having to do things to it. Ours has only been off the ground for five or so. So it's not quite time to start changing things up yet. Plus I can't figure out how he's going to have the wings and the shield at the same time. Isn't it going to get all crammed up on the wing? I don't know… When those things happen in the comics you also have a tendency, perhaps cynically, to go 'Yeah, but he's going to be Steve Rogers in two months…' He's going to wake up out of cryo-stasis or whatever it is and it's going to be like 'Oh, I need the shield back' [laughs]."

Prior to the announcement that Sam Wilson would become Captain America in the comics, many fans speculated that the films would follow the trajectory of Ed Brubaker's "The Winter Soldier/Death of Captain America" storyline, with Cap's brainwashed former sidekick, Bucky Barnes, redeeming himself and taking up Cap's shield in Rogers' absence. Sebastian Stan, the actor who plays Bucky, is signed on for nine Marvel films, and has only appeared in two so far.