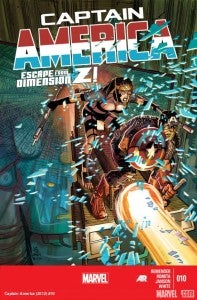 With so much attention focused on the end of DC Comics's Trinity War and the launching point for Villains Month, it seems not as much notice has been given to Captain America, where the series appeared to lose a major character in today's issue. We say "appeared" because, let's face it, the odds that this will stick are not great. But it's something that Captain Americawill be dealing with for a while, according to series writer Rick Remender. "Again, it goes back to Steve spending his past 12 years in Dimension Z and suffering the loss of his adopted son. Also, spoilers here for those that haven't read #10, but he also saw the death of Sharon Carter," Remender explained to Newsarama. "The death of Sharon isn't something Steve will be able to recover from very easily. He's been through a lot of loss recently, but he's needed. Cap is need. So Steve Rogers stands up no matter how hollow or shattered he is. And he fights forward, but also sees his own limitations. And he's going to experience those limitations." There are few things that comic book fans are more skeptical of than the death of a major character, but Remender found one of them: a "new beginning." Next issue will see the first issue without Carter since she reappeared in Mark Waid's Operation Rebirth storyline in 1995. "It's a brand new day for Cap starting with Captain America #11 – a brand new era, in fact. It's the first step in what I have planned coming next."