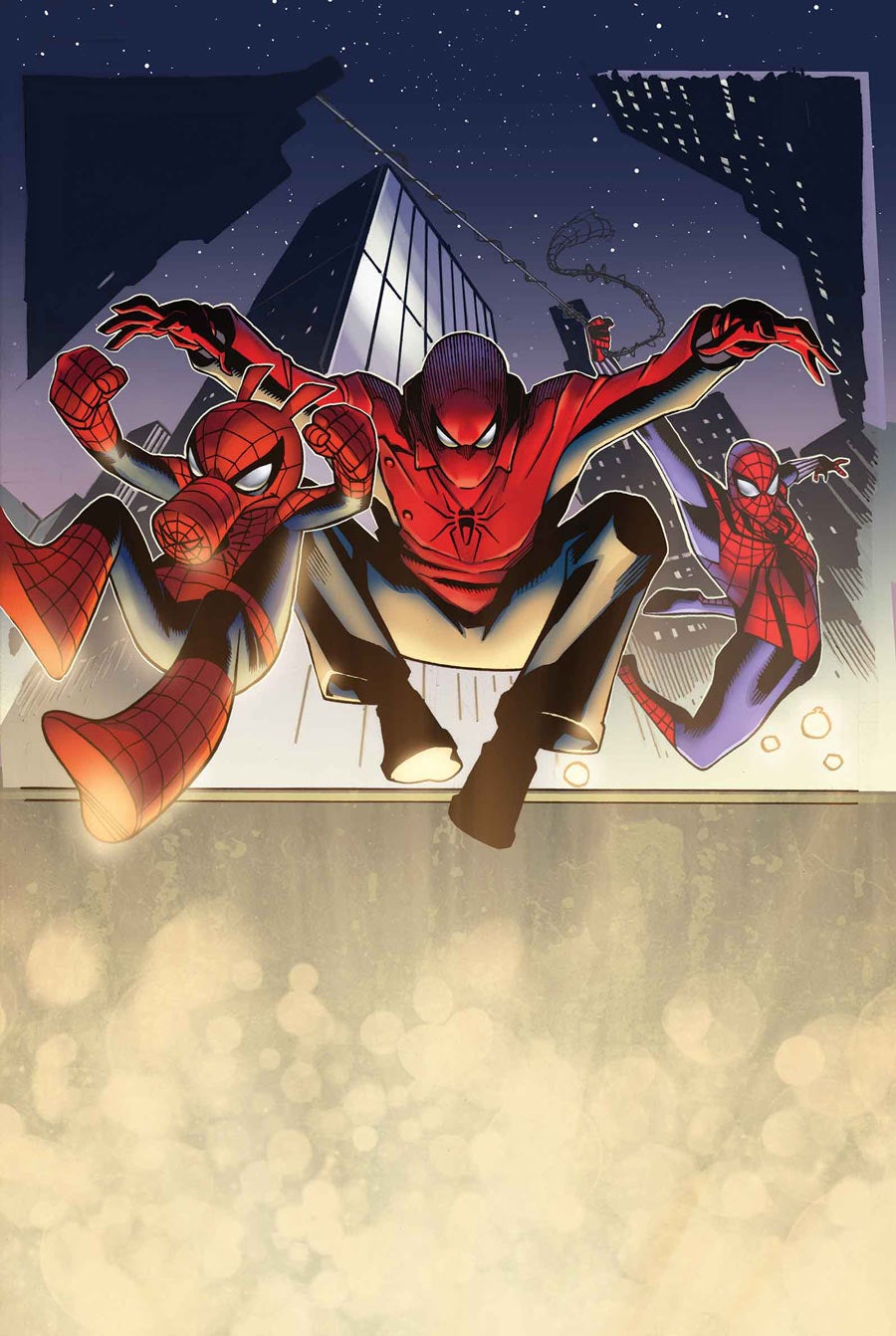 Coming in November, veteran superhero writer Christos Gage will launch Spider-Verse Team-Up, a three-issue miniseries featuring a number of one-on-one team-ups of the various Spider-Men, Spider-Girls and Spider-Women here to play a role in the Spider-Verse event.

The first issue, due out in November, sees Gage writing along with famed Spider-Man scribe Roger Stern, and art by Dave Williams (with a second artist to be announced). You can order it through the current issue of Previews.

The series will also features work by Dan Slott and other famous names from throughout Spider-Man history, and characters as varied as Peter Porker the Spectacular Spider-Ham and Mayday Parker, MC2's Spider-Girl.

Gage joined us for conversation about the series (or at least his portion of it) back during Comic Con International: San Diego last month.

First of all: Spider-Girl! You've got to know that you just made a bunch of friends for life on the Internet, right?

Glad to hear it, but I don't think I'm doing the Spider-Girl story. I believe that's Tom DeFalco. And it was Dan Slott who gave her a huge role in this!

With only three issues, so many characters and revolving creative teams, you're really the one kind of point of stability in the series. What do you plan to do in order to be as unpredictable as possible?

There's an inherent unpredictability in the dimension-crossing nature of Spider-Verse. To me, the fun lies in taking what may seem odd pairings - or ones that make perfect sense, but shouldn't have ever happened - and grounding them in character. What's it like to see a version of yourself that's living a life you never imagined?

One whose lost loved ones are still alive? One who's crossed lines you like to believe you never would? Or a version that ISN'T you, from a world where you're dead or never became what you are? And how will they react to you? That's the juicy part for me.

Do you have a personal favorite Spider-Verse character -- and if so, do you get to use that character in this mini?

Ever since writing him in the Spider-Man/X-Men miniseries I did a few years back with Mario Alberti (where each issue was set in a different era of Marvel history), I have wanted to revisit Ben Reilly. I think there's something really poignant and tragic, yet heroic about the character. And even though this is a parallel dimension version, I do get to write him in our first issue, which is awesome!

Being an event tie-in and yet a team-up, mash-up kind of stand-alone mini, how much leeway do you get, versus how much you have to serve the main Spider-Verse story?

Like most of my collaborations with Dan, it feels pretty natural. Ultimately, the idea is to tell good stories. Beyond that, we want to give more screen time to folks who could use more than they get in the main book simply due to space limitations, and answer questions readers might be wondering about...while maybe raising some new ones.

As for leeway, I want to make sure I'm doing something that dovetails with the larger storyline, but Dan and Nick are pretty easy to work with and give me a lot of room. For example, I pitched what kind of world I'd imagine Ben Reilly comes from, and Dan said it was exactly what he had in mind, so I think we're on the same wavelength...which, given how often we work together, isn't surprising!

You've worked on this kind of book before with A+X and on Spider-Man before loads of times. How are you keeping this one fresh?

It's the classic "What If" spin. The characters are at once familiar and new. That's what keeps it fresh for me. But hey, I never get tired of writing Spider-Man.

It's actually a lot of fun. When you think about it, is a talking pig with spider-powers really that much more ridiculous than a human being with spider-powers? I'm approaching it a lot like "Who Framed Roger Rabbit." Toons and people interacting.

Do you just steer into the skid and team him (or Mayday) up with somebody really dour?

No spoilers, but that's part of the fun, the personality clashes. Why team up two characters who are almost exactly the same? With a book like this, the crazier you get, the better!