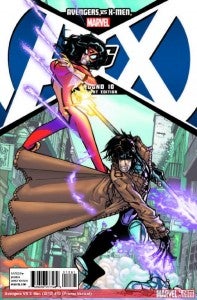 It's a good thing you stopped by to read this one, as there are SOOO many good, big books on the shelves this week!  All the big, classic heroes and many of the newer ones are flying in for adventures all their own!  Be sure to pick up several of these hot books!  Before we get started on the list, I would like to take a moment to thank Joe Kubert for his creativity, his talent, and his passion and love for the comic book medium, which has given me thousands of hours of entertainment over the years.  You will be missed.  With that in mind, celebrate the work of Kubert in your own way with some good comics.

Avengers vs. X-Men #10  Wakanda is in ruins, the X-Men are down two more Phoenix, and the Avengers are getting backed into a corner.  What happens next?  The final issues of the massive battle are unfolding!!

Avengers Academy #35  The team is splitting and changing as we speak, as now former students are losing their powers, others are changing alliances, and some are caught in the middle.  Who will be next to switch?

Captain Marvel #2  Kelly Sue DeConnick continues her bold new direction for Carol Danvers with this second issue.  If you missed the first, you BETTER go get it along with this one!

X-Factor #242  Things are about to get even crazier, and Strong Guy is doing the unthinkable.  Big changes are ahead for one of Marvel's most interesting teams!

New Mutants #47  One of the biggest enemies to any incarnation of the New Mutants returns here as the Hellions arrive on the scene in the first part of a new adventure.

Hulk #56  It's Mayan gods, Machine Man, Alpha Flight, Hulk, and all that for a couple of bucks!  Oh, and the She-Hulks!!

Dark Avengers #179  The Thunderbolts and the new Dark Avengers are headed each others way, and can anyone save Luke Cage in the process?

Avengers #29  If you read Wolverine & the X-Men #12, then you'll want to see the flip side of this issue, which will give a VERY different look at events.

Wonder Woman #12  Diana is caught in the middle, either defend Zeus from Apollo's advances on the throne, or save her friend.  Guess you'll have to read and find out what happens.

Batwoman #12  Speaking of Wonder Woman, she makes an appearance alongside the latest woman to don the Bat symbol here as a new story arc begins here.

Nightwing #12  Robin joins in the fight for this arc's final issue, with Nightwing and Paragon battling for Gotham's soul.

Supergirl #12  Supergirl gets angry with Superman, and it's all about Kandor.  What information will she learn?

Green Lantern #12  Black Hand is free, and it may take more than Hal Jordan and Sinestro's combined might to stop him.

Catwoman #12  Selina comes face to face with Dollmaker here, and it's all been building to this confrontation!

Captain Atom #12  It's the final issue here folks, but some big changes are planned for the character in the DCU after this.

Alabaster: Wolves #5  Ghosts, monsters, and demons have all been part of the obstacles for Dancy so far, but can a darkly magic town bring him down?

Victories #1  Michael Oeming's latest creation takes flight here with this premiere issue.  Six heroes are sworn to protect the city; see how well they do!

Savage Sword #5  Howard Chaykin writes a brand spankin' new Conan tale here, so be sure to get it!

The Walking Dead #101  Now that the milestone is over, what happens next for our not so merry band of survivors?

Supreme #66  Is Suprema really the last hope we have with Supreme out for blood?  Guess we'll find out.

Revival #2  If you don't know Blaine Abel, you'll want to!  Check out the life of a small town demonolgist here!

Elephantmen #42  It's the start of a new arc here, and oh yeah, Sahara and Panya are both pregnant! And in danger, of course!

'68: Scars #2  Saigon is hell, and only a handful of survivors and soldiers can hold off the approaching Viet Cong.

Extermination #3  Red Reaper doesn't have much use for Promethean, but when you're super-heroes and super-villains forced to work together against an alien force, what are you going to do?

Roger Langridge's Snarked #11  It's the next to last issue!  Don't miss out on the buildup to how this is all going to end!!