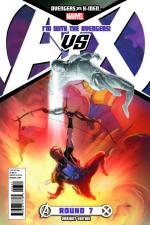 Happy Independence Day!!!  There are few things more American than apple pie, fireworks, cookouts, and comic books!  This particular 4th of July falls on a Wednesday, so you can have all of those things on one great day!!  Celebrate the day with a hot dog, some pie, a fireworks display, and read some four-color adventures of your favorite heroes!  This week will give you no shortage of reading material, so be sure to pick up some of these great reads before you head out to that cookout or other function!  Let's lead things off with a look at what Marvel has planned for us this week.

Avengers vs. X-Men #7  Cyclops said "no more Avengers".  What exactly does he mean by this, and just how safe are the X-Men with their newfound power?

Infernal Man-Thing #1  The usually silent transporter of the Thunderbolts is back in his own series, and with NO ADS, see what he may have to "say".

Powers: FBI #1  Deena Pilgrim is now in the big leagues, and you better believe that all her past baggage is NOT behind.  New roles and new secrets in this new series!

Wolverine #310  One of THE biggest mysteries in the current Marvel universe will hopefully get answered here, as we will learn just how Sabretooth grew back a head!

Amazing Spider-Man #689  So if Curt Conners is really cured of being the Lizard, then who is the Lizard?  Oh, and a runaway Morbius just for good measure!

Hulk #55  The Mayan Gods make an appearance!  Dammit, I'm not ready!  I still have too many comics to read before the world ends!

He-Man and the Masters of the Universe #1  HE HAS THE POOWEERRRRR!!  Sorry....too easy.

Justice League International #11 The team faces down against the Burners, and someone doesn't make it.  Check out this next to last issue!

Before Watchmen: Ozymandias #1  One of the most shocking characters in Watchmen gets part of his origin told here.

World's Finest #3  The Earth 2 piggybacker who came through the boom tube with Power Girl and Huntress is still on the loose.  Who could it have been?

Batwing #11  The Chinese gangster dragon known as Long faces off against Batwing.  Wait! It's a great book!!  I really love it!

Animal Man #11  The "Extinction is Forever" story reaches it conclusion here!  See what the set up for the next arc will be.

Detective Comics #11 Hypnotic's connection to Wayne Enterprises is revealed here!  Another villain gets his backstory.

Spawn #221  Tremor returns here, and the series continues to take a bold new bath.  Jim Downing is torn between two places, and how will he handle both heavenly and hellish influence?

Morning Glories #20  Sister knows best is all I've got for you on this one, and if you're a reader of the series that's all you need.

Hack/Slash #17  A new arc titled "The Good Son" begins here, and if history teaches us anything about this title, it can't be all THAT good.

Danger Club #3  The bodies keep falling and stacking here, and the teenage superheroes are more and more in danger.

Epic Kill #3  Guns only make things worse in this series, and if you knew the woman at the center of it all, you'd know why!

Orchid #8  Orchid and the Shadow Rebels scraped out a victory in their last battle, but is the real enemy within their own group?

Mind Mgmt #2  A young reporter continues her pursuit of the truth about a secret intelligence agency that uses psychics, but where will it lead her?

Creepy Comics #9  You know you enjoy this monthly 48-page collection of creepy and macabre tales.  Admit it!

Artifacts #19  Another artifact comes up for tracking, and while a doctor is the possessor of it, it may be anything but a pleasant visit!

Sunset: First Look  For only a buck you can get a preview of the Christos Gage-penned, Jorge Lucas/Felix Serrano drawn series!  An American deal!

The Darkness: Origins #4  The final volume of the origin of Jackie Estacado's role as The Darkness is here!