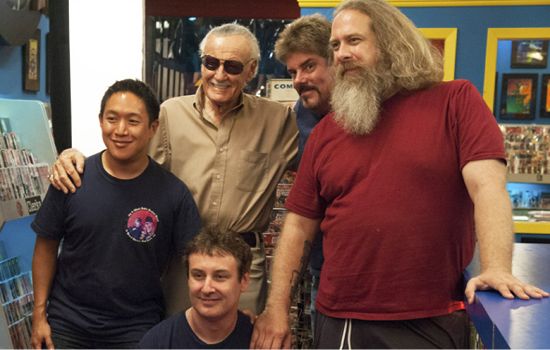 In the "Stan The Man" episode of Comic Book Men, a seller brings in a copy of the first issue of The Walking Dead, which has sold for as high as $10,000 in perfect condition. After looking at some condition issues with this particular comic, Walt says he doesn't think it will go for more than $700. Walt wants the comic, but he is unable to agree on a purchase price with the seller. Another seller brings in a copy of The Incredible Hulk #6. The seller asks $500, and Walt points out some rips and discoloration on the cover. After some negotiation, Walt agrees to buy the comic for $215. Stan Lee arrives at the Secret Stash for a photo shoot. Walt tells Stan Lee that it's a honor to meet him. Stan Lee shakes everyone's hand but misses Bryan, who moans that Stan Lee doesn't care about him. Stan Lee quickly rectifies the situation, shaking Bryan's hand and pointing out that it looks like he didn't shave this morning. Another seller brings in a copy of Planet Comics #1, which has sold for as much as $35,000. However, pop culture expert Robert Bruce points out that it is actually not Planet Comics #1, but it is a Canadian edition, which is a reprint. After some negotiation, Walt agrees to buy the comic for $115. At the photo shoot, Stan Lee strikes some poses and tells Brad Pitt to eat his heart out. After taking some photos, Stan Lee hops up on a Secret Stash counter and agrees to answer some questions. In regards to who would win in a fight between Thor and the Hulk, Stan Lee says it's best to end a superhero fight in a draw so readers can argue about who won. In regards to love advice for Bryan, Stan Lee says Bryan looks like one of the most well-adjusted guys there so he shouldn't make any changes. Stan Lee describes the death of Captain Stacy in Spider-Man as one of the most dramatic moments in comics. After answering questions, Stan Lee finishes the photo shoot. Walt and Mike beg Stan Lee to stay longer, but Bryan pushes them away so Stan Lee can make his exit. Bryan then jumps into a limo with Stan Lee, but he jokes later in a podcast with Kevin Smith that it turned out that Stan Lee didn't want to go to Atlantic City. Walt says Stan Lee's visit was a marvelous day.