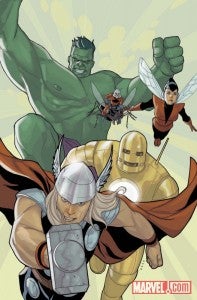 Clean the pollen from your car, take your allergy meds and get yourself down to your local comic book store for this week's big and new releases! Marvel gets things rolling in a big way with the release of several number one issues, as well as some conclusions and continuations of familiar and new story lines! The first big issue of the week belongs to none other than Earth's Mightiest Heroes, the Avengers! Avengers: The Origin #1 begins the five-issue, true history of how this team of heroes actually came together so many years ago. Speaking of Avengers, New Avengers: Luke Cage #1 will see this nigh-invulnerable hero take off on some solo adventures of his own, and the first begins here as he hits the streets of Philadelphia! They're baaaaccckkkk! Marvel Zombies 5 #1 arrives this week, and with it the ongoing saga of the zombie virus continues, spanning various universes! First up: a world where the Old West era never ended. Marvel is also taking us on a trip to the past with two historically-minded titles this week. The first is Captain America/Black Panther: Flags of our Fathers #1, which will chronicle the first ever meeting between these two flagship characters of the Marvel universe. Along with that comes S.H.I.E.L.D. #1, which will trace the origin of the peacekeeping and anti-threat task force throughout history, observing figures such as the rulers of Egypt and the great scientists of the 18th Century in this series! Deadpool and Cable #25 marks the end of the road for this series, which closes as "Second Coming" begins! Also starting this week is World War Hulks #1, which comes out of the recent "Fall of the Hulks" story. What will the future of the Hulk universe and character line-up look like after this? Who will survive? Also this week comes Uncanny X-Men #523, continuing the story of the future of mutantkind! 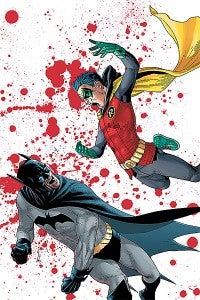 DC has some of its most iconic characters as well in the featured releases for this week, and it gets off with a bang in the pages of Batman and Robin #11, as an all-out battle emerges with Talia al Ghul, Robin and a villain from Dick's past all here! The search for Bruce Wayne's secrets continues! Speaking of iconic characters and action, Superman: Last Stand of New Krypton #2 sees Brainiac step up his plans for New Krypton, but you can bet Superman and the Legion of Super Heroes aren't going to let that happen! Red Robin #11 sees a new hero continuing his path, and JSA All-Stars #5 sees the gang continuing their epic battle against the Injustice Society! Jonah Hex #54 sees the hero framed for murder and Doom Patrol #9 brings a battle on Oolong Island and, of course, the Doom Patrol gets drawn in! Last but certainly not least is the conclusion to Sam Keith's run on Batman Confidential with issue forty-three, as the "Ghost" story arc comes to an end! DC is gearing us up for the upcoming events of "Brightest Day", now that the events of "Blackest Night" are behind us! Dark Horse has issues this week, and it's the kind that we all can handle! Starting things off for the company this 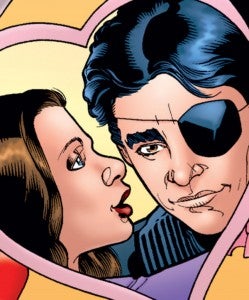 week is the ever-surprising Buffy the Vampire Slayer! Issue thirty-four is out this week, and now that Twilight stands revealed at last (hey, we're not telling you here!), where does Buffy go from here? Part three of five of "Twilight" is here, so don't miss it! Star Wars: Purge-The Hidden Blade gives you all the Darth Vader goodness you can stand! Following the events of "Revenge of the Sith", this book packs 40 pages of danger here! Need more sci-fi drama? Pick up Alien vs. Predator: Three World War #3! It doesn't get any more dramatic than that! Image Comics brings us the long-awaited and hyped Tommy Lee Edwards and Jonathan Ross team-up Turf in its first issue! The four-issue, noir series begins here! This week also sees the release of the Image Firsts line, which has the first issues of flagship series for Image being rereleased for $1.00 each! Spawn and Chew are up first this week! Invincible Returns #1 sets the stage for the upcoming events in Invincible, and he has the original costume to boot! Dynamite Entertainment has a big week this week, with The Boys #41 leading the way! Another staple of their line-up comes as well with the release of The Lone Ranger #21, and a new take on a classic character comes when Zorro: Matanzas #3 lands on comic book store shelves! Be on the lookout also for Red Sonja: Wrath of the Gods #3. Top Cow brings us more bone-crushing fun with Berserker #5. More dramatic, violent fun where a collision course for the destruction of the Berserkers is afoot! You have the information here, kiddies of all ages, and this Wednesday don't let any bloomin' thing stop you from getting your hands on this week's releases!!