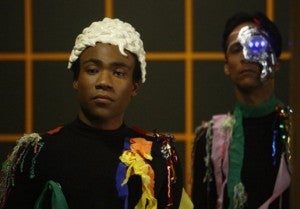 Danny Pudi and Donald Glover have taken to the Greendale study room, appearing in character as Abed Nadir and Troy Barnes and hosting a segment of their imaginary morning show, Troy & Abed in the Morning. The subject of the show? A thinly-veiled explanation of Community's fourth season premiere delay. "We spoke to the Powers That Be, and we agreed to premiere on October 19," Abed tells the audience in the video (embedded below). He added, "But even though the Powers That Be agreed to put the premiere October 19, they couldn't decide where to put October 19....They explained to us that October 19 isn't just a date--it's a state of mind." "While we may not know exactly when we're going to premiere on the calendar," Abed finishes up after an increasingly-comical monologue, rest assured when we do, it will be October 19." New episodes of Community premiere October 19--which, for the purposes of this conversation, is not tonight.