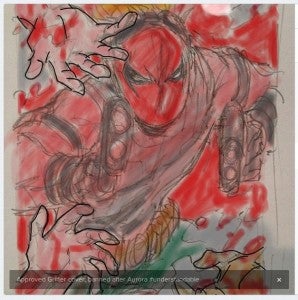 Fans who got upset last month when an issue of Batman Incorporated that contained violent, disturbing imagery was delayed out of sensitivity to the victims of the Aurora, Colorado theater shooting should probably turn away now, because apparently the impact on DC's publishing line was broader than just that one issue on that one day.

Rob Liefeld has continued to tweet throughout the day about his experiences at DC and Marvel over the years, with a heavy emphasis on his last year or so with the New 52. While not a lot of it rises above the level of gossip, one particularly interesting image came out of it; the image at left is a rejected cover for Grifter, one of the three books that Liefeld was working on for DC Comics before he walked off all of them yesterday after numerous conflicts with editorial.

The image appears to feature a blood-spattered Grifter, shooting up a group of adversaries whose bodies are falling around him in all directions. Liefeld captioned the image, "Approved Grifter cover, banned after Aurora," with the hashtag "understandable" after.

This week, Warner Brothers' Gangster Squad--written by Will Beall, who has been tapped to pen the Justice League adaptation--went into reshoots reportedly intended to restructure the third act after a scene involving gangsters opening fire on a theater during the show had to be removed and worked around. While DC's blog went silent for most of a week, it seemed until now that Gangster Squad--a particularly touchy one that clearly needed to happen--and the Batman Incorporated issue were the only specific properties affected by Warner's attempts to be sensitive to the victims of the July 20 shooting. A month later, it now appears as though (for better or worse) the impact was larger than that.