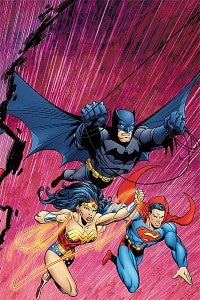 In what many are calling a groundbreaking move, traditionally American comic book icons such as Batman, Superman and Wonder Woman are teaming up to fight evil with perhaps one of the few groups they haven't come across in their many years of comic book history-a team of Muslim superheroes. In a recent announcement, DC Comics has spoken of an upcoming partnership with Teshkeel Comics, based in Kuwait. Paul Levitz, president and publisher of DC Comics, felt that the project was an important step in the right direction, "t is a long-standing tradition for characters to meet others in the fictional world, and over the years a lot of the superheroes have been translated into Arabic, taking on ethnic elements. But this is a nice step forward. The most difficult creative test is when you are working with the least precedent and when you're trying to reach an audience that has a different cultural bias and different interests."The team that DC's heroes will work with are called The 99, named as the personification of the 99 different attributes that Allah possessed, based on the teachings of the Islamic faith. The characters develop their powers after being exposed to powerfully mystical gems that contain power and wisdom. They do not have secret identities, unlike their Western counterparts, and they are immensely popular in the Muslim world. While no specific details about the project have been released at this time, DC expects the project to come out within a year, and the potential for the dialogue it could open up, on both sides of the Prime Meridian, has enormous potential. Dr. Naif Al-Mutawa, the creator of The 99 and the founder of Teshkeel Media, felt that there were multiple avenues for storytelling, and understanding, with a partnership such as this, " the other is the enemy? Enemy number one is fear. You could open it with Obama's speech (made in Cairo) with the two sets of superheroes watching it and having different reactions. There's plenty of possibilities." As more and more developments come out about this project, expect commentary and discussion from all parts of the comic book world, and the globe.

Report: WWE Booking Changes Coming Once Live Crowds Are Back