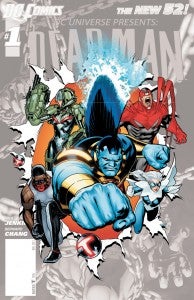 Even cancelled comics deserve to have an origin, apparently.

O.M.A.C., Blackhawks, Hawk & Dove and Mister Terrific may have been cancelled in May to make way for the second wave of new DC titles, but each of those titles will have a chance to shine in DC Universe Presents #0, September's special issue of the publisher's anthology book that features a different hero from story to story.

That leaves only Justice League International, Men of War and Static Shock without representation in print that month, as every other cancelled title will get a zero issue.

It seems likely, given that two of the four will be produced by the creative teams that worked on the titles at the time of their cancellation, it seems possible that the plan for zero issues was already in place, and these issues being worked on, before the books were cancelled. The notion of telling standalone stories to reveal some of the missing backstory for the relaunched DC Universe was hinted at conventions as early as last year and seems to have been in the works for quite some time.

It does beg the question, though, what (if anything) DC plans to do with the characters from the titles left unaccounted for. Despite an extremely acrimonious breakup with the writer of Static Shock, there's nothing that would have stopped DC from using that character in DC Universe Presents. Blackhawks and Mister Terrific, after all, are not written by the same people who wrote them as ongoing series and it appears from the solicitation that the O.M.A.C. story will be written by DC Co-Publisher Dan DiDio alone, without his co-writer Keith Giffen (who moves onto Blue Beetle in September).

In an interview with ComicBook.com last week, former Mister Terrific writer Eric Wallace told us that he would like to revisit the world of Mister Terrific at some point, but his vision was to return to the story once the character had returned from Earth 2, not to tell the backstory.

The idea of transplanting cancelled comic book characters into an anthology book in order to give their stories closure is one almost as old as serialized comics storytelling and used to be done routinely to burn off "extra" inventory stories that publishers had purchased from creators and never used. Although no major publisher has done it in the recent past, fans on message boards frequently express that they'd like to see such a thing return, if for no other reason than to allow them one last shot at their favorite characters.