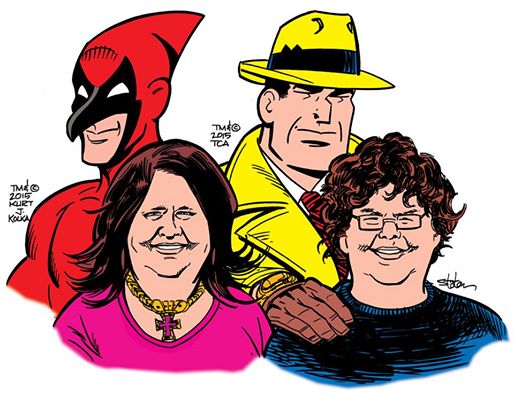 A comic strip in which many of the antagonists are people who both suffer from and are identified primarily by physical deformities will take aim at bullying.

Okay, okay, that's not fair. Dick Tracy has actually been doing its part to remove stereotypes from its pages for a while -- and now they're taking it to the next step.

Strip writer Mike Curtis and artist Joe Staton reportedly went for help to an 11-year-old and his mother, as well as a home-grown superhero.

“Bullying is a part of life no one wishes to relive, but Joe and I have wanted to take a look at the subject for some time," Curtis said. "Tracy would take no guff from a bully, so the sequence features his tweenage granddaughter, Honeymoon. She’s going through a lot of changes in her life and they’ve come to the notice of a couple of her former friends. This leads to the appearance of two of Tracy's advisors."

Collin Engler, an 11-year-old living close to Curtis, shared his thoughts and experiences with the creative team. “It’s real and it’s happening everyday in schools and other places,” he said.

Engler has organized an anti-bullying club at his school with the help of his mother Millie, who says, “Collin has taken bad experiences and turned them around into a force for good in his own world and I am very proud of him.”

“Last year, Joe and I did an epic giving [Little Orphan] Annie an ending to her adventures, which had disappeared from newspapers mid-crisis in 2010," Curtis said. "We feel Annie and her cast are part of the Tracy world and we’ve added her to the story as a friend of Honeymoon’s. Annie has dealt with bullies in her own way many times in the original Harold Gray strip, and she’s ready to stand up for her friend Honeymoon.”

Also involved will be The Cardinal, for 25 years the star of a superhero strip by Kurt Kolka, who is vocal and active in anti-bullying causes. The Cardinal, like Dick Tracy and Annie's strip, are all hosted online at GoComics.

The sequence in Dick Tracy begins Sunday, June 21 in newspapers around the world and on GoComics.com.