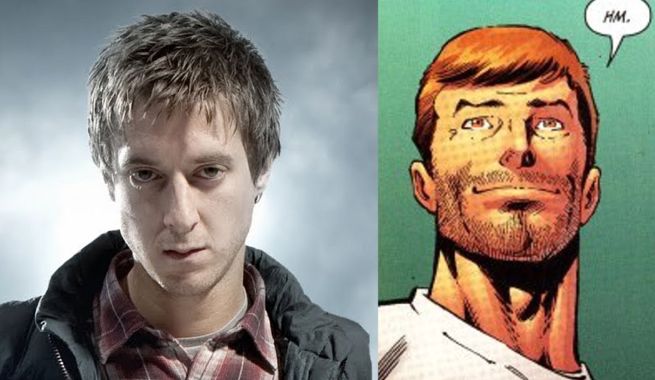 The role goes to Arthur Darvill, best known for his portrayal of Matt Smith's companion Rory Williams on Doctor Who.

Now that's a man who likes to time travel.

The CW describes Rip Hunter as "a roguish time traveler who hides the strains of being responsible for history itself behind a facade of charm and wit."

The son of Justice League member Booster Gold, Rip Hunter is generally credited with the invention of technologically-powered time travel in the DC Universe (as opposed to those who can time travel under their own power, as we've seen on The Flash). He was created in 1959, appeared in his own ongoing series from 1961 to 1965 and then had a series of status quo changes over the years leading up to appearances in Geoff Johns' JSA, 52 and Booster Gold, then Dan Jurgens' Time Masters: Vanishing Point. He wiil next appear in Convergence: Booster Gold.

In 52 and then the second volume of Booster Gold, Hunter was an enigmatic character whose true motives were often questioned -- even by Booster, who doesn't know that he's Rip's dad.

Yeah, he's that kind of secretive.

That Rip Hunter is going to be a lead on the as-yet-untitled team-up show seemingly indicates that the Booster Gold pilot planned for Syfy two years ago is officially dead.

The cast for the spinoff so far includes Brandon Routh as The Atom, Wentworth Miller as Captain Cold, Dominic Purcell as Heat Wave, Victor Garber as Dr. Martin Stein and Caity Lotz in an as-yet-undisclosed role expected to be Sara Lance, her character from Arrow who died at the start of this season. Earlier today, Ciara Renée, who just made her TV debut last year on Law & Order: SVU, landed the role of Kendra Saunders, which the report characterizes as a lead. The two remaining leads will be a brash, mysterious time-traveling hero whose allegiances are questionable and a snarky, powerful African-American character who got his powers in an accident.

It's worth noting that in 52, Rip Hunter hid a supposedly-dead Booster Gold in the costume of "Supernova," which seems like a plausible solution to the Sara Lance issue.

The series is expected to shoot for a midseason debut next year, with Arrow producers Greg Berlanti, Andrew Kreisberg and Marc Guggenheim at the helm. Meanwhile, Guggenheim will run Vixen, an animated spinoff set in the same universe and featuring the titular Justice Leaguer. That series will debut later this year on CW Seed, the network's online platform.