By the time Earth 2 #2 came out last Wednesday, DC Comics had already confirmed that Alan Scott, the reinvented take on the Golden Age Green Lantern of the same name, would be a homosexual.

And, predictably, the comics Internet exploded.

So when the book came out--and was quite good, by the way--most fans probably were too preoccupied with cruising through the issue to find their way to the pages DC had teased online to worry much about the numerous in-jokes that were left behind. Well, we didn't (and, as it happens, neither did Inside Pulse's John Babos, who contributed a few extra thoughts to this piece), and there were a whole lot of Easter eggs that were easy to miss if you weren't looking carefully at the issue. 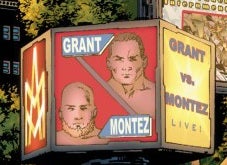 Ted Grant: Present and Accounted For

A marquee in the city, when Mister Terrific first arrives on Earth 2, advertises a boxing match for Ted Grant, better-known to longtime fans as the Justice Society member Wildcat. While there's no other information and the image is small, Babos speculated in the comments thread on one of his own stories that it looks as though Grant might have been rebooted as a person of color, too.

WayneTech: A wholly-owned subsidiary of TylerChem

Apparently, not only did TylerChem (the company owned by Hourman and his family) buy out WayneTech (which presumably is easier to do without Bruce Wayne around), but their doing so caused a six-point spike in the NASDAQ. That's confidence! Now the only question is how long it will take them to develop Miraclo and which of the Tylers might use it once they do. 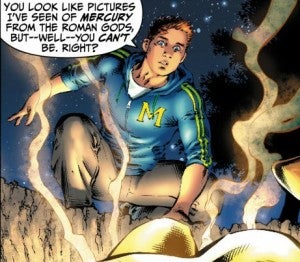 Originally, Earth 1 and Earth 2 met because the Flashes of each world vibrated at just the right frequency and could travel back and forth between the twin cities of Keystone and Central City. Here, though, there appears to be nothing of the sort planned to happen anytime soon. Jay Garrick, the Flash of Earth 2, is located out of Michigan rather than Pennsylvania--and a real city (Lansing) rather than one of DC's made-up ones.

How Terrific Is He?

Terry Sloan makes an appearance in this first issue, and it really begs the question: What's his deal? It's been five years since costumed superheroes roamed Earth 2, but Sloan shares a name with one of the previous Mister Terrifics and clearly has had his eye on "our" universe for a while, knowing who Michael Holt (Mr. Terrific) is and when he was coming. He also has been developing weapons on the side.

It's widely believed he'll turn out to be a villain (certainly that's what it looks like here), but then again, a while back we saw sketches from Cully Hamner, published in the back of DC books, that appeared to show a white Mister Terrific in them. Could Sloan be looking to return to his role?

A newsvendor on the streets when Michael Hold first arrives has the sign "All-Star Shop" over it. That's an interesting name to assign to a random piece of scenery, given that the JSA first appeared in All-Star Comics in 1940. As an aside, is that the kid from Watchmen reading a comic on the stairs right next to the vendor's stall?!

There's a reward offered for Steppenwolf, who is presumed to be on the run. Of course, if Earth 2 takes place on a world where there are no superheroes at the moment, what's the sense in offering a $300 million reward for Steppenwolf? It seems like if he ever resurfaced, nobody would be able to take him down and bring him in. That suggests to me that they've actually got some people working underground, unknown to the public, who may surface as the story progresses. 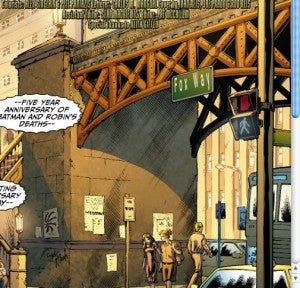 While it's unlikely they've yet peeked into Earth Prime to become inspired by the man directly, Fox Way is likely named for Gardner Fox, who created the Justice Society of America. That's not an uncommon convention in DC Comics; almost every street in Metropolis seemed to be named for an old Superman writer, artist or editor at one point.

Fans know that Supergirl and Robin made their way to "our" Earth and have assumed the roles of Power Girl and The Huntress, before attempting a return to Earth 2 in Worlds' Finest. If they're believed dead--and obviously not--then how can we be so sure that the other heroes of Earth 2 are gone, either? There have already been rumors that Superman's death might not stick.

The other question, though: in a world that more closely mirrors our own than Earth 1 does, how will the population take it when people--even people they love and miss--start coming back from the dead?

According to a monitor, there is one. Is it just me, or does that seem like a rematch waiting to happen when Steppenwolf finds his way there and takes control of the place? Rather than destroying these things that are not really "alive" anyway--EVEN SUPERMAN kills them--you put them all in one place where they're a ready-made army for the next lunatic with the power and ambition to use them?

How do these "gods" work?

It appears as though Jack Kirby's New Gods only have one version--that New Genesis and Apokolips are fighting on a higher plane and sending agents out throughout the multiverse to launch their attacks. Not so with the Greco-Roman gods who give Wonder Woman--and now the Earth 2 Flash--their powers. If there was only one of them, living on a higher plane, what happened to the rest of Zeus' crew?

Earth 2 #2: Ten Things You Missed While Focusing on the Gay Green Lantern