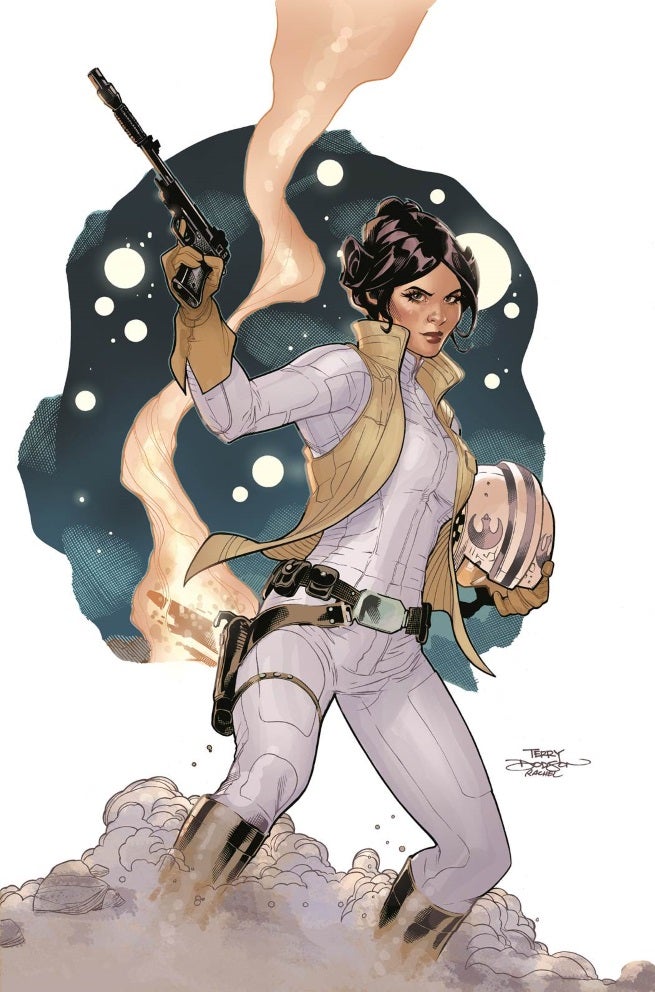 It's been a big Comic Con for Star Wars.

With a preview of Star Wars: Rebels and the announcement of a raft of new titles from Marvel Comics, things are bound to get crazy in 2015, as Disney builds toward the release of Star Wars Episode VII.

Now, as someone who hasn't read a lot of the old Extended Universe material, it's worth asking: are you the first to tackle Leia's emotional fallout from losing her homeworld?

Mark Waid: Honestly, I couldn't tell you. I find that hard to believe, but that said, I've deliberately avoided deep-diving into the Extended Universe material. It's intimidating enough writing these iconic characters as-is!

Terry, with a somewhat more photorealistic style than many comics artists, is it particularly challenging for you to stay "on model" with the actors in a comic like this?

Terry Dodson: I plan on developing a working likeness - something that instantly identifies the character as who it isn't slavish to photos - I hope to make the drawings feel more like the characters than just being traced photos.

Does doing a comic based on a movie any different in terms of process? I mean -- you can watch and see the character's body language.

Dodson: In this particular case, I am so familiar with the movies and world it definitely helps the process, But I feel it's fairly similar to other company work ( like the X-Men), where the world is established but you still have freedom to be creative in a lots of ways as opposed to this being a strict film adaptation which would be fairly drudgery work and uncreative work.

Having Leia's reaction to losing Alderaan as a key component of the story -- and the limited-series format -- was it helpful to have a pretty clear endpoint, in terms of where she ends up at the beginning of Empire?

Waid: Definitely, though that's not necessarily where we're leaving her--after all, plenty of time takes place between Episodes IV and V, and there's no need to be selfish by telling all that story at once!

The Star Wars titles all taking place right after the Battle of Yavin suggest that they're probably interconnected. As the only person with a miniseries, were you feeling the impact of plot threads from Star Wars and SW: Darth Vader?

Waid: Oh, absolutely. All good, though. That's not a limitation--that's skein of threads we can use to help weave our tale.

How much will we see the rest of the familiar Star Wars cast in this miniseries?

Waid: Some, but not overly. The entire point is to demonstrate what an amazingly strong and capable woman Leia is, and we don't want to run any risk of making her seem like a guest-star in her own book.

Mark, obviously you've done stories like JLA Year One, which take place in the cracks between existing stories. How is doing that for Star Wars different from doing it for a superhero universe?

Waid: It's really not. It's remarkably similar. In fact, it's easier because the licensors have pretty clear boundaries set for continuity, so there's not a lot of guesswork to be done. Again, opportunities without having to sort out contradictory continuities--that's good.

Star Wars: Princess Leia revolves around lead characters for whom the audience's first experience was live-action. Do you hear the lines in those actors' voices, and if so, does it impact how you write the character?

Waid: No question. How can you not hear Carrie Fisher's voice? The work--and the fun part--is "hearing" it in more unusual contexts and circumstances than her screen time has shown.

The number of artists better for a title like this than Dodson is...well, pretty small. How early in the process did you find out you were working with him?

Waid: Not immediately, but soon enough to skyrocket my enthusiasm. I love working with the Dodsons.

A friend who has drawn some Star Wars over the years said that the hardest part is getting the tech right. Would you agree?

Dodson: I can see where they are coming from but I love the stuff - and i know most of it so well (and if not then I love researching it for accuracy) and then if it isn't already preexististingh I get to create something that fits into theSW universe which is kick to do.

Have you guys got a rhythm down yet, in terms of how much he will contribute to the storytelling aspects?

Waid: Not yet--it's still early--but as I'm fond of saying, comics is a collaboration. It's not "my" story, it's our story. And I know he'll bring the heat!