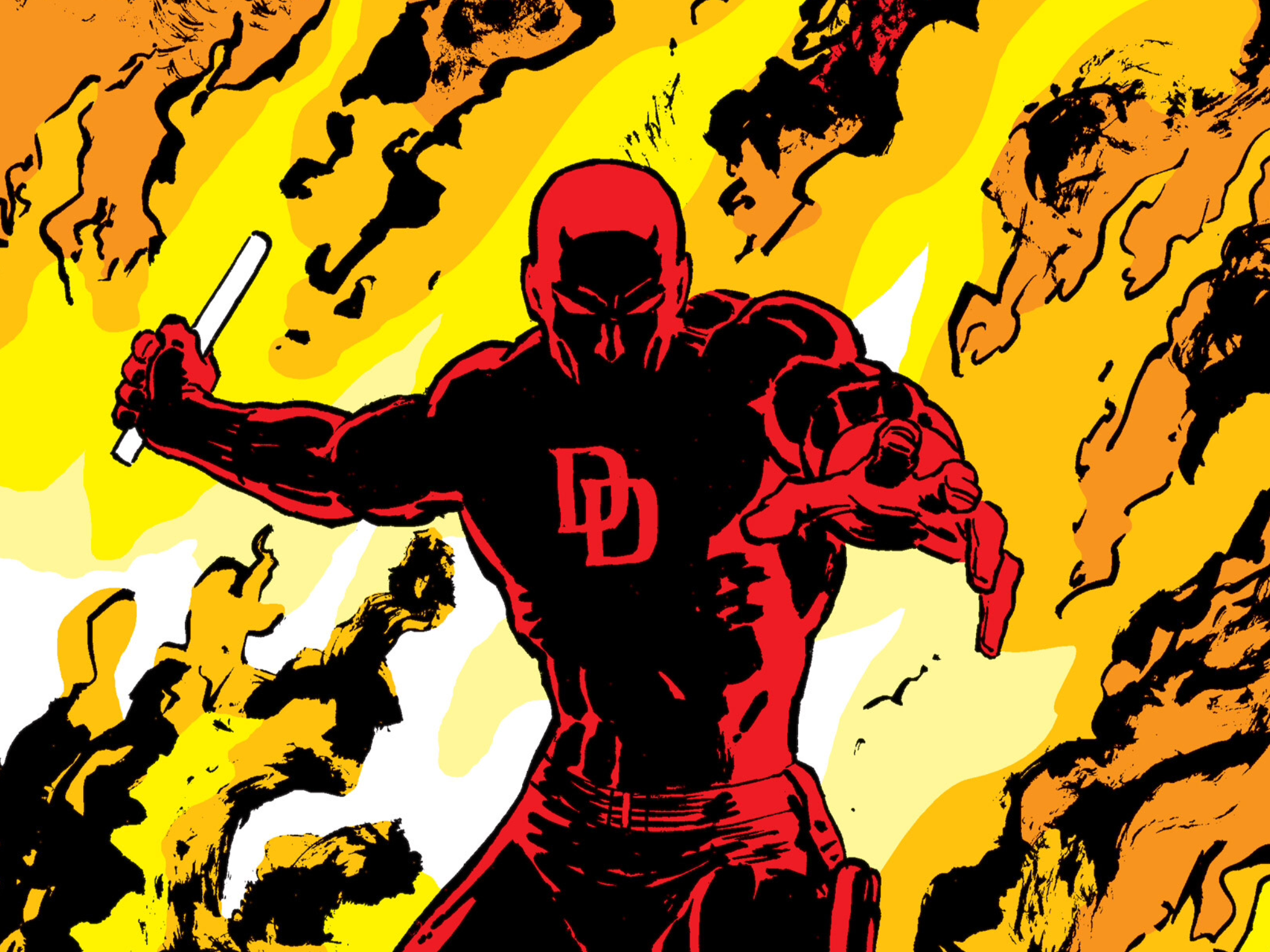 The premiere of Daredevil on Netflix is here, and excitement for the series is palpable. Now that we've finally seen the classic red costume, everything about the series is shaping up to make it a great premiere. Both the improving television record of Marvel Studios and Netflix's continued hits (ignoring Richie Rich), along with a great cast, make Daredevil seem like a sure fire success. But perhaps the best thing that the series has going for it is the rich source material that the writers, actors, and directors can all pull from.

Since Stan Lee and Bill Everett debuted the character in 1964, Daredevil has almost always appeared in at least one title at Marvel Comics. The publication history of Daredevil has placed it in a comfortable position beneath that of a major franchise like Amazing Spider-Man or Uncanny X-Men, but well above a title at risk of being cancelled on a whim. It's a position that allows creators to experiment with storytelling, and to do so comfortably for long, defining runs. That position has made Daredevil one of the most consistently creative and inventive superhero titles in the history of American comics. The list of truly classic runs could fill a book, but no creator has had a greater influence on Daredevil than Frank Miller.

Miller joined the series as its penciler in Daredevil #158 and soon took over writing duties until he left the series after 33 monumental issues with Daredevil #191. This wasn't the end of his time with the character though. He would return twice in the 1980's and 90's to continue to build upon the mythos he defined more than any other artist or writer. Modern comics luminaries like Brian Michael Bendis, Alex Maleev, Mark Waid, Chris Samnee, and Ed Brubaker all owe their beloved runs on Daredevil to the work of Miller and his collaborators. It's worth taking a look at Miller's greatest Daredevil comics in order to get a sense of both the character and what we are likely to see from the Netflix series.

Although Bullseye first appeared in Daredevil #131, it wasn't until Miller's run that he became a classic villain for Daredevil (and the entire Marvel universe). Miller and Klaus Janson, his inker throughout most of the run, crafted a self-contained story that portrays Bullseye both as an astonishingly deadly killer and absolute psychopath. It is the beginning of a rivalry that would be integral to Miller's work, and almost every future Daredevil saga to come.

Miller also chose to address an issue commonly raised by superhero fans when he has Daredevil save Bullseye from certain doom. Given the opportunity to watch the mass murderer perish, Matt Murdock opts instead to risk his own life in order to save the killer. It is a decision that clearly weighs on both the hero and those around him, and is addressed in an appropriately poignant manner. 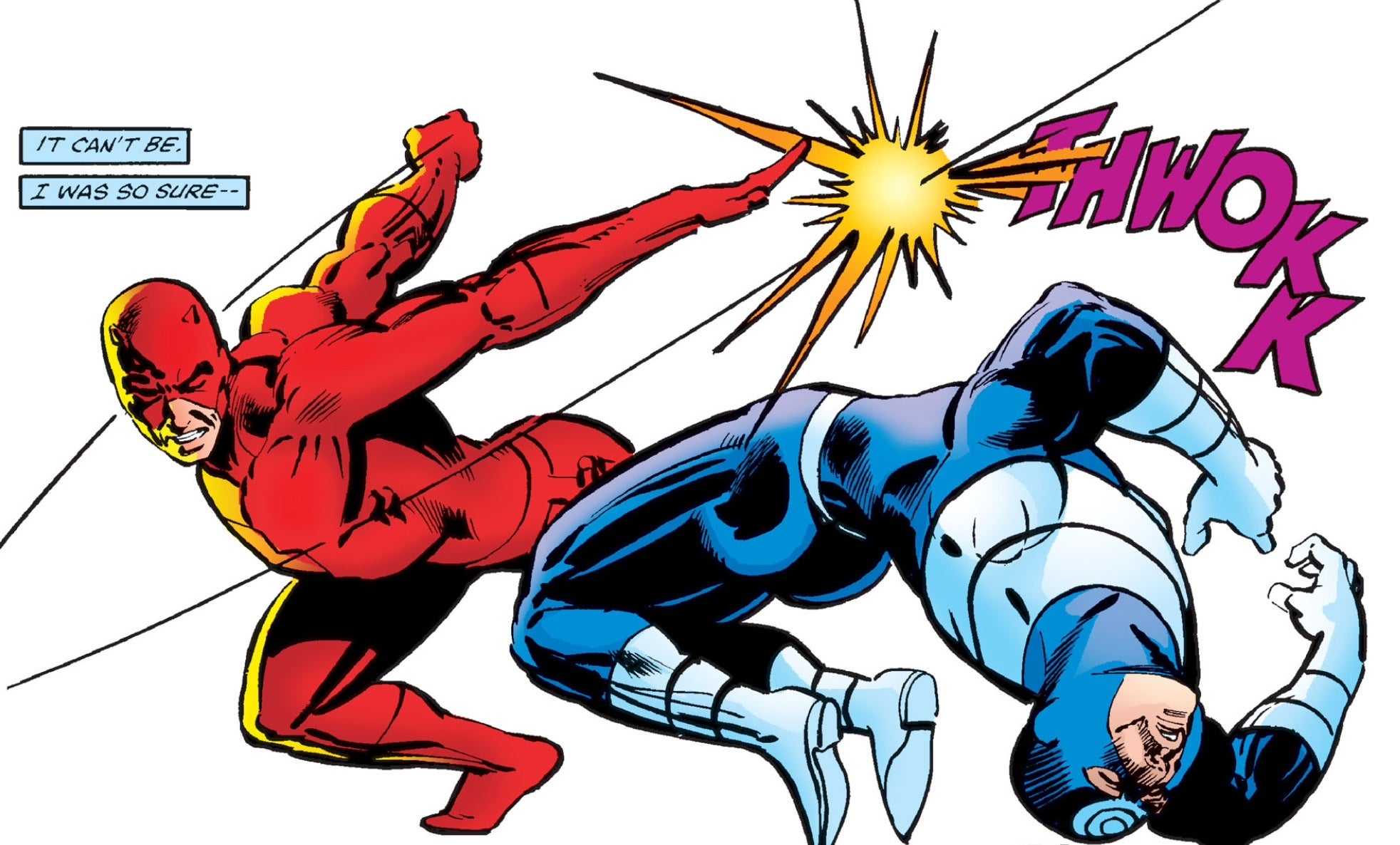 This is the double-sized issue that may be most commonly associated with Miller's time on Daredevil. It has all of the biggest elements of Daredevil's career and culminates in two of the greatest action sequences in superhero comics. Kingpin, Bullseye, Elektra, and even "Foggy" Nelson all have a role to play in this tragic installment that results in both the death of Elektra and Daredevil crippling Bullseye.

Daredevil #181 was a big issue for its time and still holds up as a significant read more than thirty years later. Miller is at the absolute top of his game drawing both of the major confrontations. Bullseye's duel with Elektra, specifically the panel in which he ends the fight is iconic for a reason. Superhero comics do not get any better than this.

Daredevil #191 marks the end of Miller's initial run on the series, and serves as a coda summarizing many of the moral themes and character statements that Miller focused on. Daredevil sits in Bullseye's hospital room and plays a game of Russian roulette with the paralyzed villain. Miller reflects on the nature of morality, law, and the conflict between good and evil in society in one of the single greatest comics ever published by Marvel.

While Janson was no longer Miller's inker for this issue, Terry Austin provides exceptional inking work to the dark tones and themes that permeate on each page. This issue marks the climax of Miller's career in some ways. It predates his work on The Dark Knight Returns and Batman: Year One by less than three years, reveals the incredible power of his long run on Daredevil, and points to what would define the next few years as the most successful of his career. 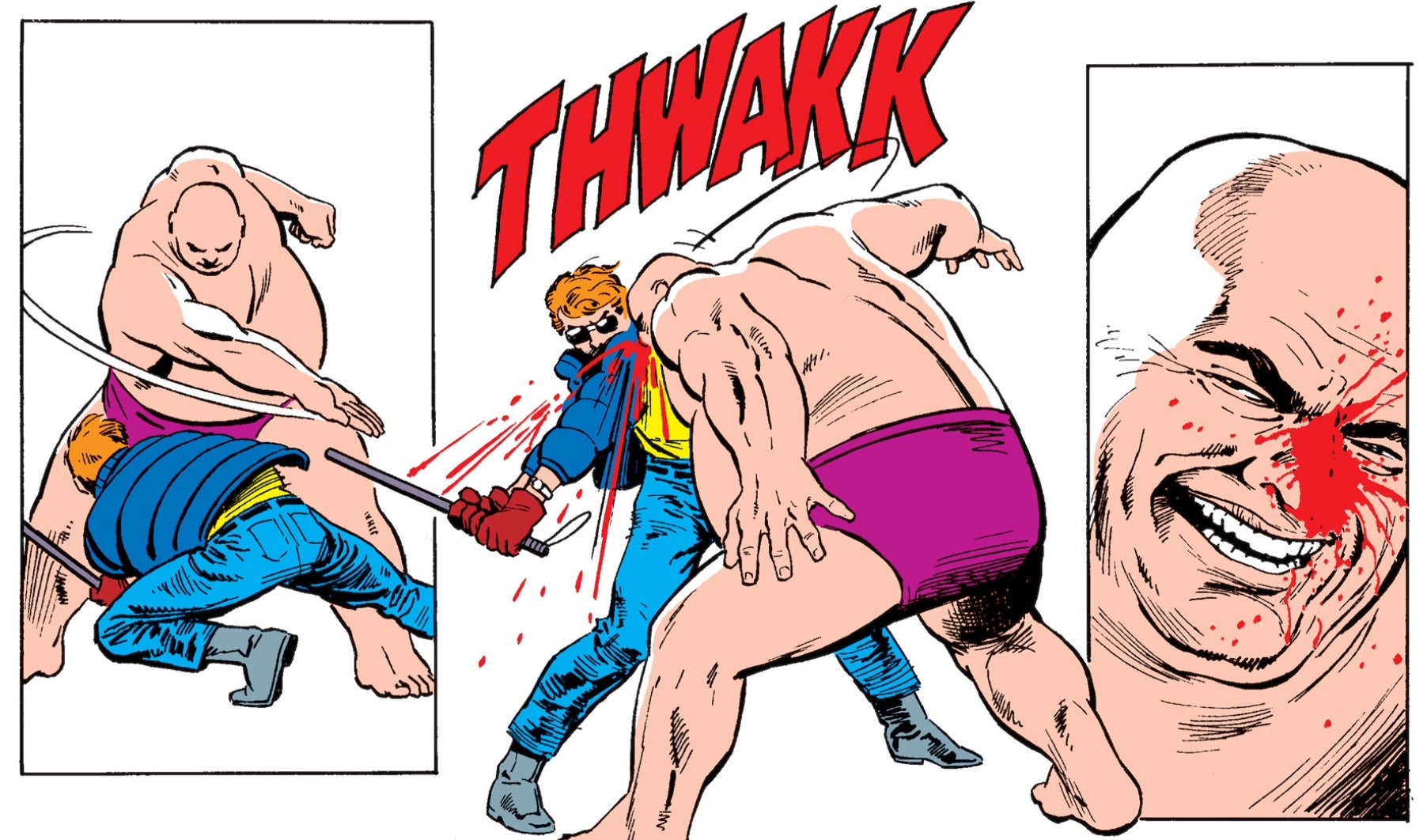 Even after his blockbuster run Miller wasn't done with Daredevil quite yet. He returned for a seven-issue stint considered by many to be the definitive Daredevil story. Miller did not pencil "Born Again", but was accompanied instead by David Mazzuccehelli the artist of Miller's Batman story "Year One". Together they drug the character to his lowes, systematically destroying his entire life before rebuilding him in order to reveal what made Daredevil a hero.

Not only is this a story that clarified exactly what makes Daredevil one of Marvel's greatest superheroes, but it also built on the mythos and define other characters as well. Miller and Mazzucchelli revealed Murdock's mother to be a nun in "Born Again", adding even greater significance to the character's Catholic morality. They also centered the story around the Kingpin, forever cementing him as an iconic villain only to be rivaled by Bullseye in Daredevil canon. 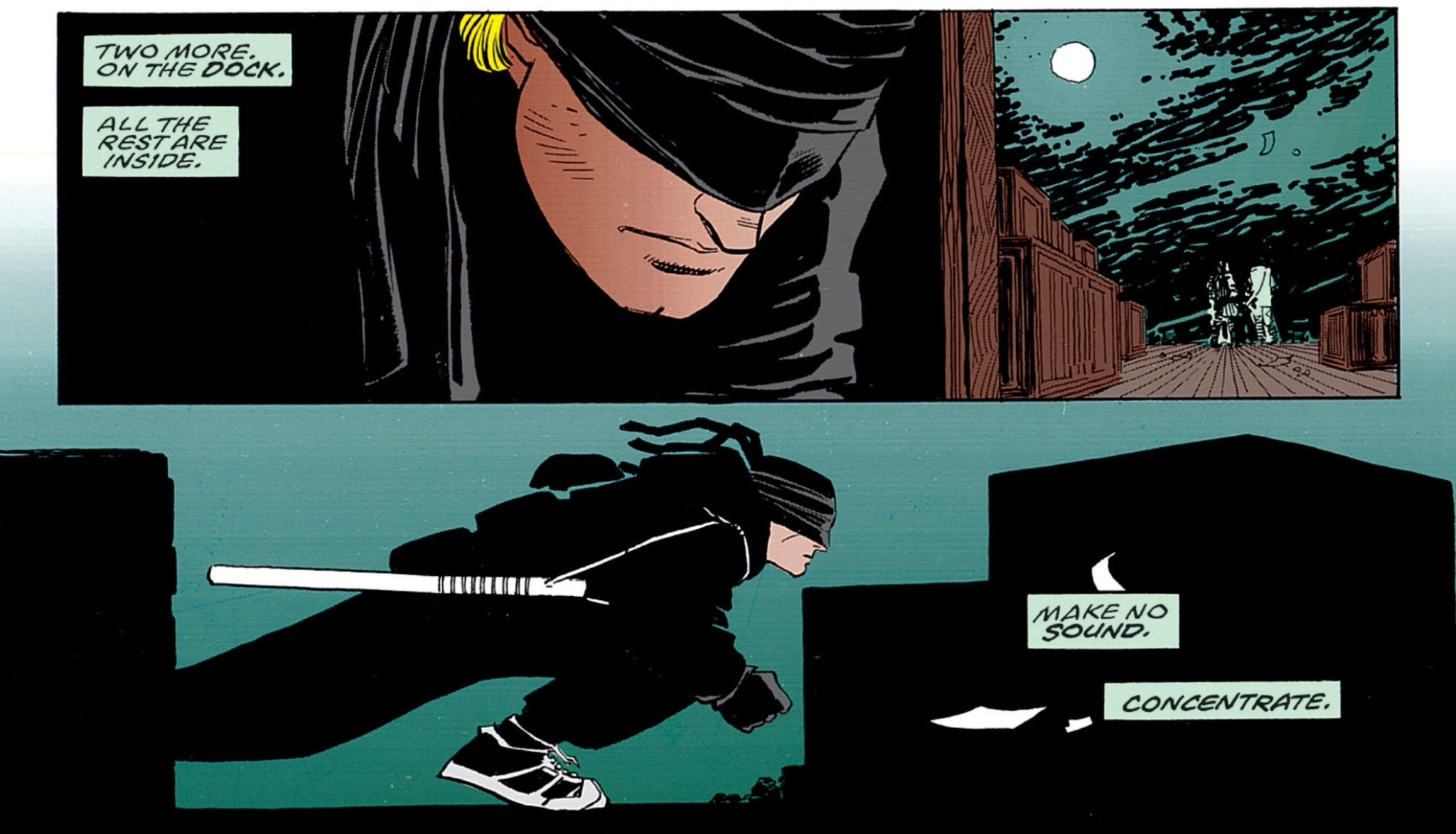 5. Daredevil: The Man Without Fear

This mini-series would be Miller's last significant contribution to the character, and with an all new collaborator: John Romita Jr. Together they retold the origin of Matt Murdock, beginning with his time as a child in Hell's Kitchen and ending with the first appearance of him in the classic red costume. The mini-series feels somewhat out of place when compared to Miller's other work on Daredevil. It is even darker in tone and places Murdock in a significantly uglier place, adding child abuse and accidental manslaughter to his origin. The mini-series straddles the line between Miller's most beloved, iconic work and his later descent into self-parody.

It appears that "The Man Without Fear" has a significant influence on the Netflix Daredevil series. The black costume used in all of their promotional materials is pulled directly from the work of Miller and Romita Jr. In this series, it is the only costume Murdock uses when facing off against the Kingpin and his criminal empire. The dark tone of the trailers also fit the feeling of this story perfectly.

These five stories are only the highest of highlights from a creator and character who have shaped comics as we know them today. They are not only some of the best examples of the superhero genre, but of the comics form as a whole. Looking at the work of Miller and collaborators like Janson, Mazzucchelli, and Romita Jr., it's no surprise that Daredevil has been one of the most consistent creative successes at Marvel Comics. Given a track record like the one found above, Netflix and Marvel Studios have endless potential to craft a truly great television series. We can all hope to see some of these excellent stories rediscovered come April.

What are your favorite Daredevil stories by Miller? Share them in the comments below.