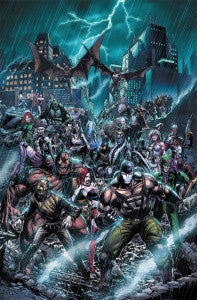 When The Dark Knight Rises came out last year, one of the most controversial elements of what turned out to be a surprisingly controversial film among fans was the voice that Tom Hardy used when playing Bane.

""Bane is somebody who's in tremendous pain all the time," Hardy told The Business Insider. "So he had an older voice. Which is sort of Richard Burton, I suppose, you know. Slightly florid, camp English villain … in many ways, but just off-center."

That threw people--some who couldn't understand what he was saying, some who thought it felt silly and out of place and some who were upset that the character and/or the accent wasn't South American, since that's his comic book origin. Apparently, though, Batman and... writer Peter Tomasi dug it, because he told Comic Book Resources today that Hardy's Bane is the voice he hears in his head when he's writing the character for the new miniseries Forever Evil: Arkham War, in which the character is prominently featured.

"When I've got Bane speaking to his men and gesturing with his arms, Hardy's voice as Bane is just the one I'm hearing in my head," Tomasi said. "And it works! I remember when people were saying, 'What's he saying, I can't understand him,' but I thought it was perfect. His voice in that film is just a real hook for me. You wouldn't expect that kind of voice to come out from that kind of being, that person, and it's a great contrast to that visual."