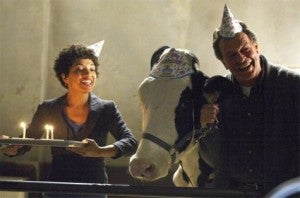 For two hours next Friday, Fringe fans will be glued to their TVs, watching what promises to be a tense and emotional series finale. In a model that's become popular of late, the cult hit was renewed last year for a fifth and final season. This gave the fans time to adjust, the showrunners time to plan and the beloved series an opportunity to hit 100 episodes on its way out the door. It also meant that there was an end in sight for the network, without jumping ship prematurely and ending up on the bad side of thousands of angry fans sending letters and e-mails and pretzels and waffles or something. It's a model that worked for Chuck--a show which, like Fringe, was saved more than once by a committed fan base who reached out to advertisers and the network to plead the series' case. Now, though, we're less than a week away from the final Fringe--and this spoiler-ish 30-second teaser is one of the last promos for the series. Check it out, and tune in on January 18.