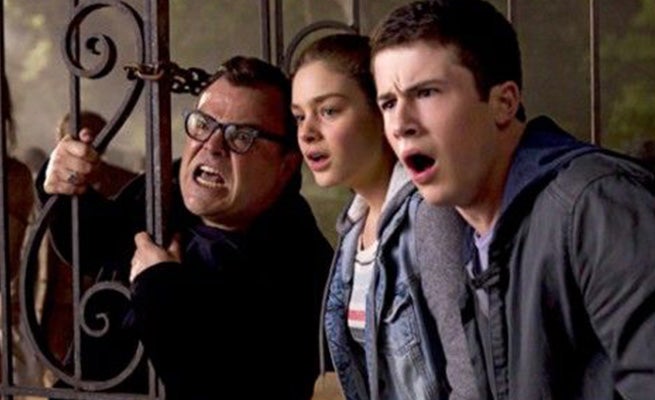 Earlier today, Sony Pictures Entertainment hosted an event at CinemaCon showcasing their 2015 line-up and beyond. The audience was treated to some exclusive footage in the form of an unfinished trailer for the upcoming film, Goosebumps.

Zack Cooper moves into his new house. He sees R.L. Stine, played by Jack Black, staring creepily at him from his window. Even though Zack waves, Stine does nothing but watch before swiping his curtains closed.

Later, Zack hears a scream. He tells his friend, who he calls Champ, that he wants to go inside. Despite his friend's fear, they open a door and go inside Stine's house. They find that beyond the door is only a staircase going down to darkness.

Zack and his friend find a book case. It's filled with novels by R.L. Stine that have locks on them. Zack unlocks one as Stine finds him in the room. He apologizes and wants to put the book back but Stine yells for him not to open it - he does anyway. A whirlwind takes the room and forms into a monster, more specifically, the abominable snowman.

The monster looks around as Zack, Stine, and the others hide, trying to be silent. Zack's clumsy friend knocks over a lamp, though, causing the monster to charge towards him and out through the wall of the house. Stine scolds Zack, saying he released a monster.

An army of gnomes form in front of Zack, but he isn't worried until they throw a hammer at his head. They charge him with hammers and pickaxes in hand as he and his friend flee.

Elsewhere, Zack and his friend hide in a grocery as a werewolf sniffs them out. After it finds them, Zack, Stine, and the other run out a back door to escape. Stine locks it and says, "Let's see him get through that!" The werewolf busts the door off the frame. They run again but are trapped just as another friend rams into it with her car.

They come to the realization that they have to suck the monsters back into the books and are seen doing so with the werewolf.

Cut to the group in a car, stopped by a giant praying Mantis. Stine doesn't remember creating it, until it sneezes on the windshield blocking their sight.

On a hockey rink, the group flees from the abominable snowman and slams a rink barrier door behind them. The monster runs into it and falls down unconscious. The group begins to be relieved just as the monster awakens.