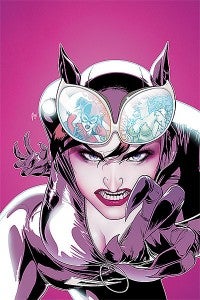 Batman's death in the pages of both Batman and Final Crisis was a major shake-up in the Bat family and its collected titles. With the cancellation of Birds of Prey, Nightwing and Robin, the expected relaunch and uncertain direction of the Batman universe was watched with anticipation, nerves and hope. Now that the battle for the cowl has ended, and Dick Grayson, the original Robin, is wearing the bat symbol, the entire franchise has seen a title relaunch with several new series. One of those to come out of the sweeping change has been Gotham City Sirens, a title focusing, so far, on Poison Ivy, Harley Quinn and Catwoman, all three major female forces in the life of Batman and Bruce Wayne. While it's still in its infancy, Sirens has become the series, when compared with the other new series such as Red Robin and Streets of Gotham along with Batwoman-led Detective Comics, that has yet to really make an impact at this point. The first two issues have focused mostly on Selina Kyle adjusting to her life and place now in a Gotham City without Bruce Wayne. She aligns herself, tentatively, with Harley Quinn and Poison Ivy, even setting the three of them up with a place to live. Issue one ended with an interesting cliffhanger, Ivy commanding Catwoman to tell her Batman's identity. That was the main highlight of issue one. What would issue two have in store? This latest installment shows a flashback to a very important encounter between Selina and the Talia, two of Batman's most intense loves over the years, as Talia discusses their unique shared interest in Batman shortly after his demise. This scene leads us back to Ivy's pointed question of Selina, over the identity of Batman. Using an interesting technique learned from Talia, she's able to answer the question in a satisfactory manner, resolving the issue. The story quickly shifts to incorporate Hush, now impersonating Bruce Wayne around town, as he has a very interesting meeting where Harley ends up saving him from some random hoods out to make a score. Our issue ends with Selina and Ivy realizing that Elliot has in fact taken Harley and perhaps brought her to some harm. Paul Dini's story is clear and direct over these two issues so far, but it's not particularly stirring in terms of content and narrative drive. It's a slow build, but there's hope that the series will pick up more over the next two issues, especially now that Hush is involved, considering his vendetta against Harley and especially Catwoman, who destroyed him financially after Bruce's death. The piece with Talia at the beginning of this issue is interesting, but seems to take too long to resolve and move us back to the main story. So far in the first two issues, the main drive and impact of the story has been coming in the last couple of pages, but can that be enough to carry and sustain this new series, especially when there are other bat books that are certainly grabbing early praise, like Detective? With so much potential and history with these characters, there's hope that the pace will quicken and with it, the interest and vitality of the series.
Start the Conversation