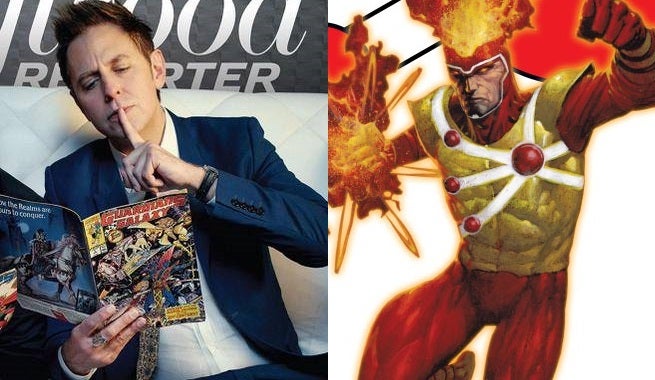 A few months ago, Guardians of the Galaxy director James Gunn and star Chris Pratt were featured in a cover shoot for The Hollywood Reporter. The cover had Gunn and Pratt sitting on their hotel bed, reading comics and with a whole pile of additional issues right in front of them.

Almost the entire pile was Marvel comics, mostly Guardians of the Galaxy, but one was a cover featuring DC Comics' Firestorm (the issue was Brightest Day #17). Fandom, as it tends to do, seized on the one element of the photo that was out of place and, as it tends to do, formed some conspiracy theories around it.

Gunn has taken to Facebook to set the record straight. He says the Firestorm cover was not a hint that he is directing a Firestorm movie for Warner Bros., or that some Marvel and DC crossover event is in the works. No, the cover being in the shot was just a simple mistake.

"Although most of the comics on the bed were Marvel, I noticed there were a handful of DC," Gunn explains. "Although I am historically a lover of both, I decided to push the DC comics out of the shot, and pull as many Guardians of the Galaxy comics into the shot as I could - after all, they were the reason we we there. However, I apparently missed the Firestorm comic in the lower right hand corner."

#tbt So this cover photo of us was taken the night of the Hollywood Film Awards a few months ago. Chris and I accepted...

There you have it. The mysterious Firestorm cover was never meant to even be in the shot, never mind be a coded message. Now we can all go back to looking for evidence that John Lennon's death was part of a larger conspiracy by examining the covers of Beatles albums.

What's not a conspiracy is that Gunn will return to direct Guardians of the Galaxy 2, releasing in theaters May 5, 2017.

Guardians Of The Galaxy's James Gunn Explains That Firestorm Comic