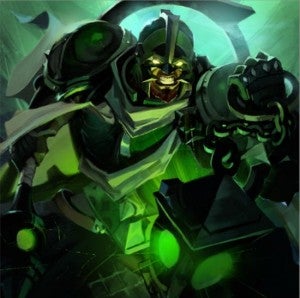 Infinite Crisis is an upcoming multiplayer online battle arena (MOBA) set in the legendary DC Multiverse and in development by Turbine. Ever watchful of creatures from the Black, Arcane Green Lantern lights a path to victory through support and defense of his allies. Sir Harold Jordan, a highly distinguished member of the Order of Emerald Knights, was only a child when the Shadow League unleashed the Black. Monsters poured from the darkness to slay everyone in their path, including young Harold's family. If the famed Emerald Knight Alan Scott had not intervened, the boy would have also perished. Raised by a legend among the Emerald Knights, Arcane Green Lantern is a shining beacon of strength and will upon any battlefield.