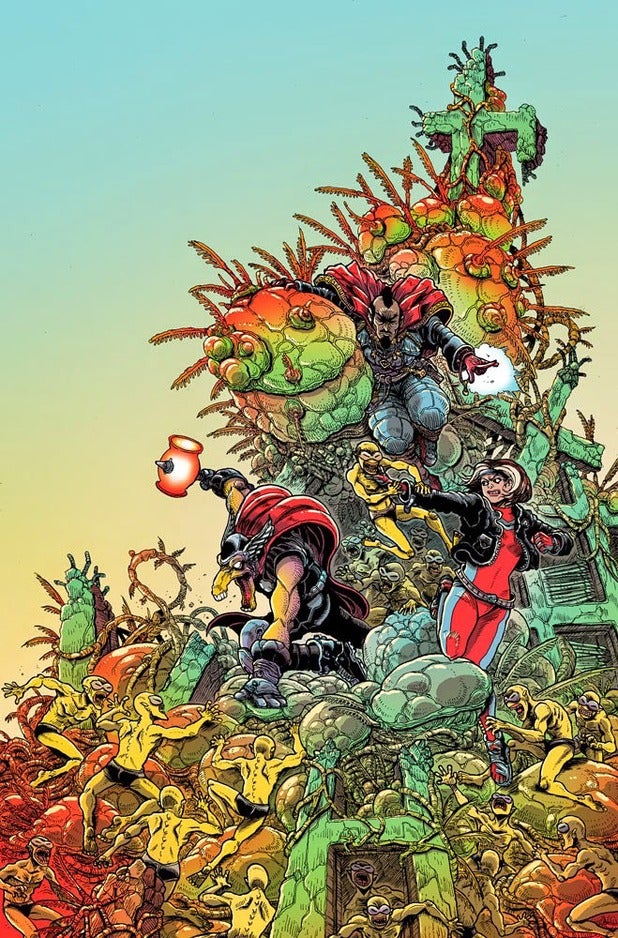 There are perhaps more Avengers comics coming out every month than there should be. It would be difficult to argue that there isn’t a market for them, if only because Marvel wouldn’t put something on a shelf it didn’t think it could sell. The mere presence of books like New Avengers, Avengers Arena, Mighty Avengers, Secret Avengers, etc., is evidence of consumer desire, but it is not an indication of quality storytelling. Like the sad case of Wolverine, when something, whether it be a character or or an event/stunt, reaches a high enough level of narrative and market saturation, the original core of that character or concept begins to break down. Jonathan Hickman’s Avengers, (along with its sister title New Avengers) is a plodding, overwrought trek through Marvel’s most banal corridors, as only a man so invested in turning each comic he works on into some sort of infographic can create.

The Avengers line of comics needs new blood and new energy. And there’s one comic that has that that in spades: Marvel 100th Anniversary: The Avengers #1, written, drawn, colored and lettered by indie maestro James Stokoe.

First, a quick explanation: The general thrust behind these 100th Anniversary books is simple: what would an issue of a particular comic look like if it came out during the 100th anniversary of Marvel’s existence (which might be 2039, 2063, or somewhere in between depending on which origin point you consider to be the valid start of Marvel proper)? The properties chosen here are no surprise, the big franchises are still the only ones readers care about, even in the theoretical mid-21st century.

Make no mistake about this book though, it is not some lazy “What If?” high concept story. It is a James Stokoe comic through and through. Translation: it is weird. Marvel’s triumvirate of Cap, Thor, and Iron Man have been replaced with a much less conventional Big 3 in the form of Rogue, Dr. Strange, and Beta Ray Bill. Their adventure, which sees them battling Mole Man III days after a cataclysmic war with the Badoon, is rendered in Stokoe’s gooey-organic and hyper-detailed style, replete with the grotesqueries found in his independent work, books like Wonton Soup and Orc Stain.

Stokoe, the notoriously meticulous (if Orc Stain #8 comes out on August 30th as it’s supposed to, that will close the more than two year gap between it and issue #7) yet acclaimed cartoonist, has worked for Marvel before, but not on its most treasured franchise. Here, on “The Avengers,” he has an opportunity to unfurl some much needed conceptualization in the world of Earth’s Mightiest Heroes. In this issue we’re treated to an alien spore-ridden Kuala Lumpur (the new home to the Avengers) where Iron Man, now a towering monolith with Tony Stark’s brain floating in a cylinder of green sludge within, stands guard. Mole Man III rides atop a giant bone-chewing turtle with a cannon mounted to its shell. Steve Rogers floats around the Negative Zone, which is now, rather nightmarishly, filled with candy and watermelons.

If all this seem silly, well, then that’s because it is. But Marvel 100th Anniversary: Avengers #1 is not an un-serious book. Stokoe’s new team of Avengers are a group of immortals (each with their own reason for outliving the rest of their comrades) with a nearly destroyed world to protect and an important question to answer about a constituency that will go on without them despite their greatest achievements or failures (perhaps a comment on artists and writers working for corporate publishers). And the solution to their conflict with Mole Man is inspired, flying in the face of the standard punch it till it’s dead denouement that our modern creators love so much. 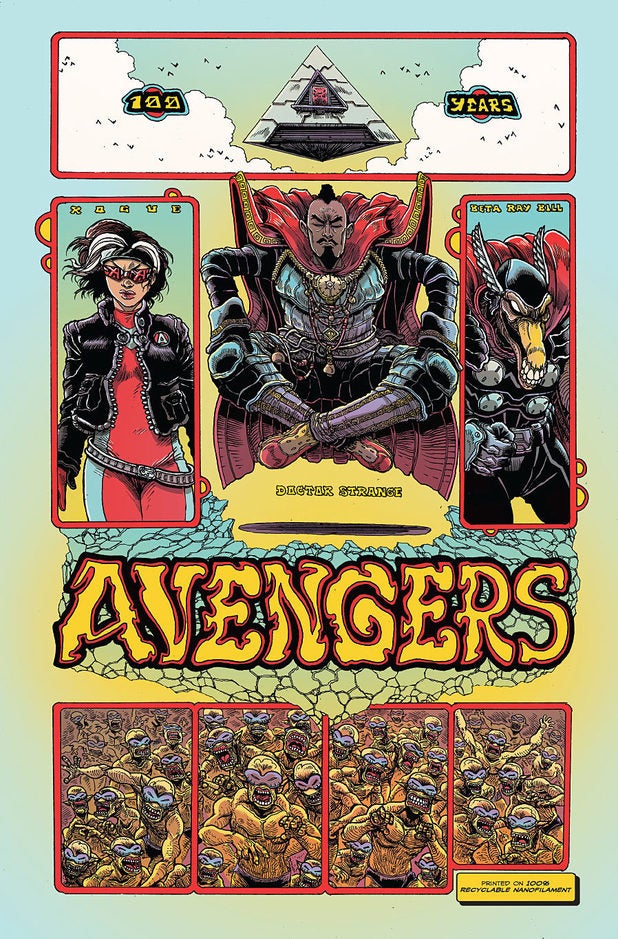 Editor Jon Moisan (and whichever boss of his green-lit the book) should be commended for bringing James Stokoe back into the Marvel fold. Hopefully this book is a harbinger of more superhero work from one of the best working cartoonists today. And if not, at least readers will have a momentary respite from the dull and over-saturated presence of Marvel’s largest franchise.