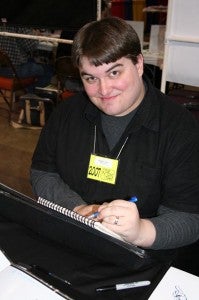 Being a part of a successful and well-known franchise, like one such as G. I. Joe, can certainly make a lot of people sit up and take notice, and with artist Jeremy Dale, he's certainly an artist to look for as he increases his profile and projects, those of his own creation, such as his self-created Skyward series, and his work on the Harvey Award winning Popgun vol. 1. The break into big name projects such as G.I. Joe and Popgun came with his work on Wildguard: Fools Gold #1 by Todd Nauck, who was looking for someone available and who, Dale said, could do pages, "lightening fast," and from there forward Dale has kept himself busy with multiple projects, but he does have a soft spot for his work on G.I. Joe. Having been a fan of the characters of G.I. Joe ever since he was a child, Dale eagerly accepted the challenge of drawing the world of Larry Hama. "It was very interesting. Coming in and working on G.I. Joe: A Real American Hero, just gave me a chance to really geek out as I was getting these jaw-dropping scripts from Larry (Hama). It was great because our series, which was set during continuity between the Marvel run of this series, was just great, because I could really see it all come together," said Dale. In discussing the upcoming movie version of G.I. Joe, G.I. Joe: The Rise of Cobra, Dale preferred to keep it all in perspective. "I'm looking forward to seeing it, even though I've heard some not so good things about it early on, but I don't go to movies to look for the bad; I like to be entertained and I'm hoping for the best." Another thing that certainly entertained him was hearing that Popgun had won a Harvey Award in 2008, an experience he describes as "Stunning. It really just went to show that you had all these new, creative and talented people who had something interesting to say, hundreds of people were involved in that and I really think of it as a big step, because we had something interesting to say. It brought a smile to my face," he said, enthusiastically. As more and more people become aware of his work, and the titles and companies he's worked for such as Hasbro, Top Cow, and Image Comics, fans are actively seeking him out on his busy convention schedule. "I'm everywhere this year! I'm trying to go lots of places such as Dragon Con, Wizard World Chicago, Baltimore, and lots of other shows. It's nice too because I'm starting to see some familiar faces at these shows, and that's always nice to see." His solid work in the past has led directly into his very busy present and future. A project he completed last year, work on Dial C's Miserable Dastards, sees the light of comic book store shelves this September, and has gotten early praise from Previews magazine. With multiple commissions, his own work on his series Skyward and others in the works, it would be safe to say that Jeremy Dale will be an artist on the rise more and more as his work and buzz continue to circulate! Check out more of his work at jeremy-dale.com.