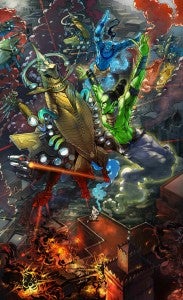 Jabal Entertainment's inaugural comic book series has landed at the doorstep of IDW Publishing.  The series promises a different take on "survival of humanity" tales with a look at a very special race that comes on the scene to save the human race, the Jinn.  Never heard of them?  You might know them better as genies.  Yes, genies!  Typically known as lamp-inhabiting, wish-granting entities, the genies are on hand to combat the forces of the Kibrani, who have come to Earth seeking to invade it.  The book has a good stable of talent under it, with three 2011 Kubert School graduates handling a lot of the art and interiors. Tony Vassallo, Carli Ihde, and Timothy Yates to be specific on names! For IDW, this book offers them the chance to continue expanding their international talent and storylines.

“I've long known Sohaib [founder of Jabal] to be a clever, insightful guy in regards to pop-culture on his Fictional Frontiers radio show, and he's definitely proving that he can extend that inventiveness into graphic fiction as well,” said Chris Ryall, Chief Creative Officer of IDW Publishing and co-host of the bi-weekly segment “Ryalltime" on Fictional Frontiers. Jinrise has a very unique blend of old-world myths and modern-day fantasy and science fiction, and it's something I'm very happy to bring to IDW.”

The series will seek to blend fantasy fiction and the elements of the heroic quest with a rarely used Middle Eastern motif in the genies, so fans of either of those genres should plan to pick up the series when it lands in stores next year!

Jinnrise Announced by IDW for 2013 Publication