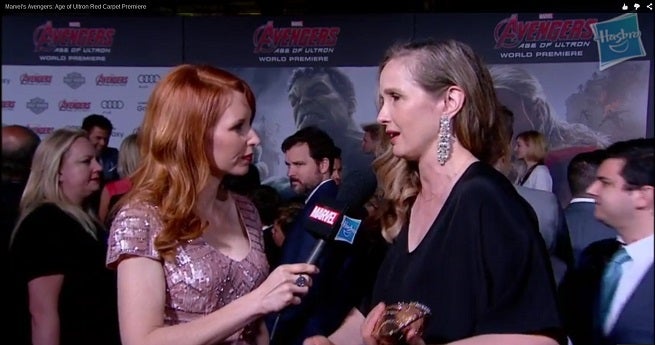 During her red carpet interview tonight at the Avengers: Age of Ultron premiere, actress Julie Delpy revealed -- unintentionally, apparently -- the nature of her character in the film.

Delpy was a last-minute addition to the (known) cast list, and speculation has swirled around who she might play. The Before Midnight actress hadn't made a public appearance in support of Age of Ultron before now, and when she did, she apparently immediately spilled the beans...

...and then did so again, in communicating to the hosts at the red carpet that she'd done so.

Delpy will apparently play one of the trainers from the Black Widow project, who made Natasha Romanova into the character that she was when we met her in Iron Man 2.

She said that in spite of being best known for more intimate and arty films, she jumped at the chance to do a big Hollywood blockbuster, because she's always enjoyed them and doesn't bear them any kind of ill will like some "arthouse" actors and filmmakers do.

Avengers: Age of Ultron opens in just over two weeks in the U.S.