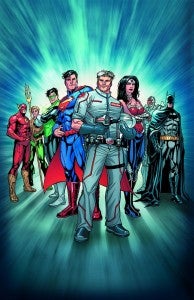 Every so often, superheroes get a product tie-in comic, and it usually goes something like this: "There's a crisis and the superheroes can't stop it/save the world/beat the bad guys without [insert product here]." The comics are usually pretty awful, objectively speaking, and they tend to play up the worst in what mainstream, non-comics readers expect in comic books (mediocre art, virtually non-existent story, shameless consumerism and dudes in spandex). On the other hand, they can be just the right mix of bizarre, zany fun--the most obvious and frequently-cited example being the famed Hostess Snack Cakes ad campaign that used both DC and Marvel Comics characters. This month, Craftsman ("America's most trusted tool brand") will release such a comic, wherein a character called The Craftsman Technician will be at the Justice League satellite repairing something with his new Craftsman Bolt-On System when The Key shows up, and is foiled using the power of Craftsman. "Accomplishing a DIY project can make you feel like a superhero in your home, and the tools you use are a big part of that," said Michael Castleman, president, Kenmore, Craftsman and DieHard, SVP, Sears Holdings. "With the switch of an attachment, the Bolt-On tool system can transform into nine different tools to tackle any task. With this comic and our presence at Comic Con, we want to show DIY to a new generation of tool users." Of course, The Key--while a considerable threat at times--is not unfamiliar with getting his butt kicked by "that guy over there who has a bunch of stuff on his belt." One of his most memorable appearances was a Grant Morrison/Howard Porter JLA issue where he's got the entire League subdued and is taken out by Green Arrow's son, Connor Hawke, using his father's self-evidently ridiculous boxing glove arrow. "We loved working with the Craftsman brand team on this project," said Hank Kanalz, SVP of digital, DC Entertainment. "In the new, custom comic book we spotlight how tools play an important behind-the-scenes role in this Justice League story, from tuning up the Batmobile to getting the Invisible Jet back up and running after an epic battle. It's a unique angle, one that we don't get to see in the normal course of our stories." It's not exactly unheard of. After all, there was a chunk of time in the 1990s when Kilowog had lost his power ring (the Green Lantern Corps had collapsed and The Guardians of the Universe were not there to reboot it yet) and remained on Earth, serving as the handyman for first the Green Lantern Corps of Earth and later the Justice League under Giffen and DeMatteis. During this time, the popular Green Lantern often found himself helping the League beat the bad guys through the use of some sophisticated piece of machinery he put together in the garage. Physical copies of the Craftsman comic will be available at New York Comic Con but it will also be available digitally, free, on the DC Comics app that weekend. There's a contest, too, to see who can come up with a strong premise for the next adventure. Whoever does so can win tickets to New York Comic Con in 2013 and a tour of the DC offfices. Check out more details at The Source.