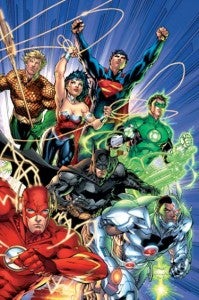 It looks like DC Comics re-launch is working big time. According to an article in the Los Angeles Times, there are more than 200,000 copies of Justice League #1 on pre-order. The numbers are high enough to make it the best-selling comic book of 2011 so far.

That’s not all. Six more DC New Universe #1’s have more than 100,000 copies on order. Not surprisingly, Batman, Action Comics, Green Lantern, Detective Comics, Superman, and Flash are the six other titles to crack into six digits in pre-orders.

While there will obviously be fall-off for the second issue of each title, the fact that the pre-order numbers are so high is a very good sign. There will likely be lots of new faces heading into comic book shops for the chance to pick up a Justice League #1 or an Action Comics #1, and if some of them stick around that can only mean good things for the comic book industry.

It will be interesting to see what type of sales numbers the remaining 52 new titles put up, but with a lot of comic book shops offering deals on ordering the complete set, DC Comics is likely in for a really good sales month. After the top seven, which other titles do you think will sell the best? Aquaman? Wonder Woman?

Mushoku Tensei Is Reportedly Working on Seasons 2 and 3 Simultaneously