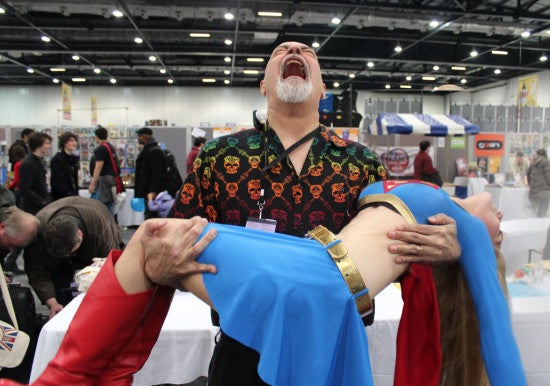 This year, the series is leaning more on guest stars than it has in the past, with Lou Ferrigno and the Batman creative team of Greg Capullo and Scott Snyder joining Perez in taking the screen...but Perez's episode is a special one; when one of the guys has lost most of his comics in the wake of Hurricane Sandy, the rest of the Stash employees pitch in to replace them for him, and to set up a special appearance by Perez.

It isn't the first time Perez has been mentioned on the show; a while back a signed poster of his was one of the items a fan came in to sell and the staff's admiration for Perez was evident then. Now, though, what was it like having Perez, Capullo and Snyder on their "set?" Smith told reporters at New York Comic Con:

"[Perez] is a legend, such a sweet guy. He was great - he did a Wonder Man piece for his Zapcic because Zapcic loves George Perez's work. Walter is a massive George Perez fan, and so once the cameras were on he was just like 'blah blah blah,' and you can tell Perez was like, 'okay, let's get down to business.' He's just uncomfortable with all the praise.

"And so we've got some creators on this year as well. We've got Scott Snyder. That represents the new for sure as well. Scott Snyder and of course Greg Capulo working on Batman right now- one of the greatest Batman arcs of all time. We brought them in and did--there's a section of the show called 'podbuster' ironically enough. It always feels weird when we're like 'We're shooting the podbuster,' and I'm like 'I don't want to bust pods - I like pods!' but the idea behind the podbuster is the one, and I'm sure you guys know what this is, it's a one-minute act of television, it's not really a full act of TV but it just stops you from going 'badoop, badoop' and zipping through commercials. Like Oh s--t! The show's back!. And you stop and it's only an minute long and suddenly you're back into commercials. So the podbuster this year I was like let's bring in some creators Normally it's us sitting around telling a story - I was like let's bring in some people I know because I'm working on a Fatman on Batman podcast, I meet a lot of cool cats so we brought in Snyder and we brought in Capulo and we did wraparound podbuster sequences with them and both were really good. And that to me that was fun too because it allowed us to show some artwork, do it a little bit differently than we've done in previous years- but also give a nod to what is current as well."

Asked about whether the decision to incorporate guest stars into the podbuster segment related to ratings, Smith laughed it off:

"If it was tied to the ratings I don't know if we'd be like 'Get us Lou Ferrigno.' Those would be ratings in the 80's. AMC doesn't seem to care they're not like 'You gotta sexy this f---ing show up. If anything they're like 'Keep it more like what it always is'--they dig it very much.

"So they've never been like 'You gotta bring in some people.' In fact most of the times we're like, 'Hey, we want to bring in some cats' and they're like 'Well, shouldn't it just be about 'the boys'? And that's kind of like the wall you hit at all times on that show--like second season, at one point they were toying with the notion of doing 'on the fly's' as they call them. Where it's like you're the guy coming in with this f---ing thing to sell and after the transaction was done they go outside with you and you talked right to the camera." 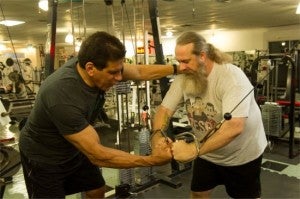 "Yeah, just like Pawn Stars. I was like, I understand how it works for that show but what we got going on in this show is like...we don't have to look at the camera - like they tell me what went on by the podcast device. So they don't have to be looking in the camera and go 'I hate Brian this week he said some s--t...' And you know things like that. So you get rid of that device altogether so every step of the way we so like anytime we're like Hey we want to bring somebody in AMC is like weeellll no need keep it centered on the boys. Because that's what I said in season 2 - to get rid of those OTF's, I was like there's no point in spending time with somebody coming into the store with their transaction, great.

"Beyond the transaction? Finding out their - that's what the boys pull out right there in the store. To them double up on it and have a dude talk into the camera removes anything kind of graceful about it. So my argument was it takes away from the boys--the show should always be on them. So anytime after that, I'd be like"Hey, we want to bring George Perez - they're like 'shouldn't it be about the boys?' So it comes back to bite you in the ass - They've never been like 'You've got to get something sexy in there' at all. You can't sexy up that cast! You cannot polish a turd. You know what it is."