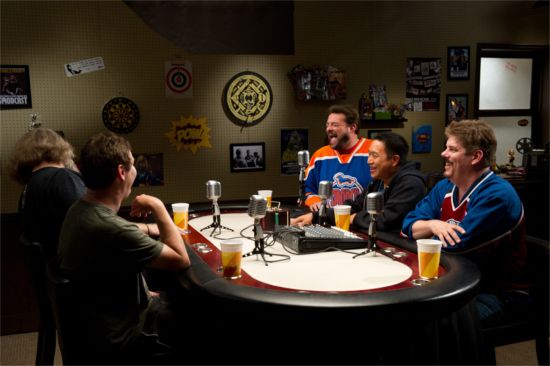 Last weekend, ComicBook.com was lucky enough to sit in on a media roundtable with the cast of AMC's Comic Book Men, including creator/star Kevin Smith. UPDATE 11/1/2013: Please note that producer Brian Nashel's name was originally erroneously transcribed as Brian Michelle. We apologize for the error. The indie filmmaker behind Clerks and Red State spoke with the press about a wide variety of topics relating to the show, many of which we've showcased over the course of the last week, but then once the more specific questions had been shaved away, he shared some thoughts on the broader aspects of the show. Below, find a partial transcript of the roundtable, where Smith discusses the unique pressures and pleasures of Comic Book Men, his desire to make the show interesting to himself in the hopes that will make he and his co-stars more interesting for others to watch and some stories behind this season's guest stars, which include The Incredible Hulk star Lou Ferrigno, legendary comics creator George Perez and the Batman creative team. Some of my favorite parts of the show are when you guys are just hanging out around the table. How much influence do you have over content? Kevin Smith: We have a fantastic editing team. I would like to say that we make the call, but we don't. There's an editing team comes in and they've got a real good eye for the show at this point. I get a cut of the show--it's about 29mins long--but Brian Nashel, who runs the show - he's the genius that's in charge, sets the tone for everything, kind of built Comic Book Men from scratch. He'll send me a 29 minute cut of the show or 28 something like that--later as we get deeper in the season the cuts come down to about 25. Essentially we're looking for 21 minute cut of the show. So I'll get the longer cut and kind of just take out the s--t where I'm like 'this is slow, this isn't that funny, this is moving kind of bad, this didn't really play," but before I even get to it, the editors go through it all. Brian Nashel sits right there when we do the podcast thing so as he's sitting there he'll tick off a lot: "I like this, remember this," and then gives those notes to the editor. Generally speaking the only s--t that doesn't make air is like if we're talking and people get real blue and s--t. Start talking using words that are never gonna fly on f---ing television obviously we know that it's not gonna go beyond the table at that point we try not to do it cause as fun as it is, it's kind of a waste of time. We can sit there and curse each other out on a podcast all day long without a crew of people sitting around us with cameras going "C'mon, get back to Batman." So we tend to keep it on point when we're there in the room but it's somebody's job to figure out what stays, what goes. First line of defense is Brian Nashel. He's the one that sits there and goes, "Alright, that's funny, that's funny..." and really, there's kind of a shorthand that's makes it easy from what they've told me. Anytime that Walter Flanagan laughs, we zero in on it. Because he's a tough customer to make laugh and when he chuckles he's got this wonderful vibrant laugh--so that's when they're like look for anything around that laugh and they build out from there. 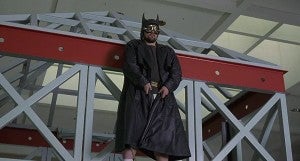 You mentioned getting people back into comic book stores - when you do those round table, you go to conversations about comic books that go beyond The Avengers, Dark Knight movie stuff and I love that you bring that more to a mass audience. Is that part of what you want to do with the show? Or it really just the way you guys talk? Smith: It really grew we out of the way we talk and stuff we talked about. There was really no kind of sit-down design: "Alright, we'll only talk about these kinds of comic books...." This year we tried to get a little more current because after the first two seasons I was like, man all we talk about is s--t that's old. And you see on Twitter people going like "What about a f---ing new comic book - The New 52?" Oh yeah, I guess we should talk about the present but as middle-aged men, all we want to do is talk about then, not now. It's just like NOW blows, I'm old and s--t. I was young and comics were awesome! So basically, this year we started trying to bring in a little more current stuff but our bread and butters always gonna be the reaching back because you can speak, I can speak eloquently to stuff from old. But if it comes time to speak new 52 then Mike's the most eloquent. Because he's still in the thick of it, reading every issue that comes out of the New 52, every DC book, every Marvel book. So it's tender traps sometimes to talk about the old stuff because you do tend to alienate some people, like "Why am I going to go back and buy this f---ing old-timey thing? I like The Avengers!" or something. So there is a little more of a conscious effort going in this year, like, "Oh yeah, let's acknowledge that geekdom has exploded into the f---ing mainstream. But that's another reason it feels you don't want to talk about The Avengers and Dark Knight--it feels like that's taken care of. They'll do that in Entertainment Tonight, they'll do it in the mainstream media, they'll talk about those big ones but to sit around at a table and talk about Alan Moore's Swamp Thing on a television show? Like when 20 years ago, 25 years ago when I was jut a collector and s--t, loving comics, if somebody told me that one day you're gonna watch a show and some fat guy in a colorful shirt is gonna talk about Alan Moore's Swamp Thing at great lengths, I'd be like sign me the f--- up now. And then I get to the future and it's like Oh It's me?!? F--k! But that's the kind of thing I'm into - more than "Hey, The Avengers made billions of dollars" and we're all like--we all know that. We've all seen The Avengers to death and it's stuff that we'll talk about in regards to The Avengers , the stuff you could go on poetically about, eloquently usually the stuff that grabbed you before anything else when you were younger and the stuff that sank it's claws into your heart. There's a reason as a 43-year-old you're still talking about Batman where as most 43-year-olds are not. You know there's a reason, this s--t matters and now it sounds stupid to say but 20 years ago you couldn't find many people to agree with you. You'd find people in a room like this, in a convention center, but now you can go beyond that. Now they study comic books in college and s--t. It's legitimized. So you can have a podcast like [Fat Man on Batman] and cry while talking about f---ing the latest Justice League movie and people aren't like "Kevin, you need help." [laughs] You know people are just like, "That was really touching, wasn't it?" And you get all these people coming out of the closet going "I cried at the end of Dark Knight as well" and stuff like that. So I feel like it's not our duty or anything like that but I feel like we're at our best when I talk about s--t that means the world to us, and most of that s--t tends to be older comic books or geek stuff as opposed to current. I feel like Nerdist covers current pretty well Hardwick takes care of the now, we take care of the then. 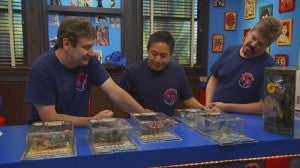 You had two episodes, "Con Man" and "Stash Wars"--you feel like doing something similar this season? Smith: I've seen 6 so far. There's an episode called "Super Friends" where Mike lost all of his comics during Sandy so the boys kind of go out to replace them and then they bring in a special guest, George Perez. Ah, who else? Lou Ferrigno comes [in the] first episode to train Bryan because he's like out of shape or whatever and that's actually kind of sweet and fun and he's good - Fergino is f---ing good and then we actually wind up talking. Walter had this thing where he's like "I loved the show" and I was always fascinated by the episode where you fought a bear and s--t and so he talked about fighting a bear, and being in the makeup, and they just pushed him the water and were like, "Fight this bear," and so they got the footage and it was the first time we ever licensed clips to actually put on Comic Book Men. Another one I just watched with the boys last night was Storage Wars: They go buy a, or bid on a storage unit so that goes outside, we go to the Baltimore Comic-Con for Cryptozoic Man in one of the episodes. So there's not like a conscious effort, like "Get out of the f---ing Stash!" but we spend so much time in the Stash that anytime we can walk out of it, it's like a breath of fresh air and the thing has not been boiled down to--I guess formula's a s--t word but I don't know what else to say. The formula of the show is kind of, they got it where Brian Nashel got it right last year, where there's a balance of transactions and a balance of a story. And then there a lot of episodes like we did last year and now we're going again this year where we don't do a plot - no A story - like there will be a key transaction that like sparks conversation throughout. We've got 16 episodes in season 3A and 3B and I'd say that 8 of them are not plot-oriented, just the guys sitting around, doing transactions and having a good time.