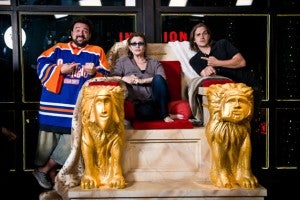 The series is set up like a talk show, except that instead of a monologue, the first segment of the show features Smith's trademark Q&A-style interaction with the audience. Here, though, the twist is that Smith attends a movie screening with a group of fans who join him afterwards in studio for an uncensored chat about what they've just experienced.

The premiere, titled "Girls Just Wanna Have Guns," examines Snow White & the Huntsman, with the audience consensus being that the film was beautifully shot and mostly entertaining, but short on plot and character development and that star Kristen Stewart didn't bring much to the table. That segment is a welcome addition to the film criticism landscape, not just because it's refreshingly different from anything else out there but because we haven't had a truly entertaining movie-review talk show since Gene Siskel died and left the esteemed Siskel & Ebert team to deteriorate.

Between the segments is the most entertaining sponsorship break I've ever seen--a long-form ad for the Criterion Collection special edition DVDs, which have an agreement with Spoilers' producer Hulu. Rather than just do a personal endorsement, though, Smith uses the time to examine some of his favorite films available through the Criterion Collection (this time, Jim Jarmusch's indie classic Stranger Than Paradise), which tellingly, Smith suggests first that fans should buy at a brick-and-mortar store, and that if they can't or won't then they can check out the movie (sans features) for free on Hulu. 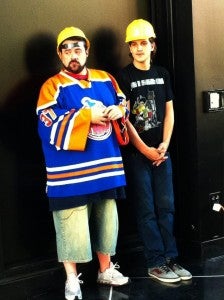 Next up is a guest segment--this episode, with Carrie Fisher of Star Wars and The Blue Brothers fame--and there again, it plays to Smith's strengths. Few people in show business are more entertaining than Smith when just set loose to talk, and his conversation with Fisher, which talked mostly about Star Wars and The Blues Brothers,  was entertaining, allowing the two of them to bounce off each other entertainingly and to share drug and sex secrets that would never fly on most talk shows--certainly not on network television. Future guests--aside from Smith's longtime sidekick Jason Mewes, who appears briefly in this debut episode to usher the audience-participation part of the show to an end--will apparently include comic book legend Stan Lee, who is featured in one of the photos on the show's Facebook page.

If there's a weakness to the show, frankly, it's the editing. It's clear that Smith, his guests and audience went on a lot longer than what we're seeing in the episode. The cuts themselves aren't a problem--they likely made the show more entertaining, improved pacing and everything else that cinematic cuts are meant to do--but they're jumpy and obvious, something that leaves the viewer feeling a bit like they're missing out. The ultra-casual format of Smith's show is probably what sells that, and leaves you feeling like you've suddenly been left out of the intimate conversation you were a part of just a second ago.

Overall, the show leans pretty heavily on Smith's persona and likability, so if you're not a fan, it might not be as perfect for you--but it's a strong show, well-structured, that makes perfect use of its star and stands toe to toe with some of the best talk shows on TV.

This isn't Hulu's only venture into original programming this year--like their competitor Netflix they seem to see their own creations as a way to generate revenue without having to rely on studios and networks with whom they might not always see eye to eye and to whom they have to pay substantial licensing and exhibiting fees. The popular website, which features both a free edition online and a feature-enhanced paid version you can stream to your TV or mobile device, also has original programming lined up featuring filmmaker Richard Linklater and musician Paul Simon, both of whom got name-dropped during conversation in the first episode of Spoilers.

Next week's Spoilers, due on June 11, will see Smith and his audience discussing Prometheus.