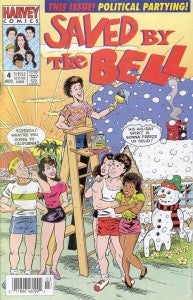 NBCUniversal announced today that they have partnered with digital publisher Lion Forge Comics to develop licensed comic books based on '80s and '90s TV staples like Airwolf, Knight Rider, Miami Vice, Punky Brewster and Saved by the Bell. "Partnering with the team at Lion Forge to bring classic TV properties to life in graphic novel format was a natural step for us as we continue to identify new ways to entertain our fans in the digital space," said Chris Lucero, director of Global Consumer Products Licensing for NBCUniversal Television. "We're excited to give fans a chance to revisit some of their favorite shows and characters in a completely new way." Writers signed on to work on the projects include Joelle Sellner, Jonathan London, Geoffrey Thorne and David Gorden. Wetworks veteran Jason Johnson and Lion Forge's own Carl Reed and Lorenzo Lizana are on board as artists. "From hugely popular characters such as Crockett and Tubbs, Zack Morris and Punky Brewster to highly stylized music and clothing choices, these TV franchises have had a significant impact on pop culture," said David Steward, CEO, Lion Forge. "We here at Lion Forge are looking forward to extending that influence by creating visually appealing and entertaining experiences on mobile devices for a whole new generation of fans." The comics are planned for distribution in the next few months and will be available through the Amazon Kindle Bookstore, Apple iBooks, Barnes & Noble's The Nook Book Store and Kobo.