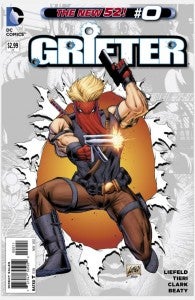 Rob Liefeld, who recently left his three titles at DC Comics in a blaze of Twitter glory, threw some fuel on the fire last night for fans expecting some major announcements coming out of DC Comics's New 52 panels at this weekend's New York Comic Con. "So, Tomasi, Meltzer, Hitch..New Superman, New Superman/Batman...Legion Lost, Grifter, Frankenstein, Blue Beetle gone-Put those to NYCC test," tweeted Liefeld last night. A new Superman title--reportedly Man of Steel, by Scott Snyder and Jim Lee--has long been expected among DC's New York Comic Con announcements this weekend, and so it's hard for Liefeld to necessarily impress anyone with a claim like that--but the rest of that tweet is interesting. Legion Lost, Grifter, Frankenstein Agent of S.H.A.D.E. and Blue Beetle were reportedly "safe until February" not long ago, but all of them sell at or around the apparent cancellation threshold for New 52 titles--between 12,000 and 18,000 issues. Liefeld used to write Grifter, which puts him in a position to have seen such a memo if one did exist. It's interesting to note that all four of those titles were part of DC's original launch, meaning that the already-announced G.I. Combat would be the only second wave title to be cancelled to make way for a fourth wave of new titles, if indeed that's what this is. Bryan Hitch, who had already told fans he had an announcement coming up at New York, is an interesting revelation--what he (and Brad Meltzer) might be doing is anyone's guess. Peter J. Tomasi is currently writing both Green Lantern Corps and Batman and Robin, so it's likely he would have to leave one of those in order to take on a new project.