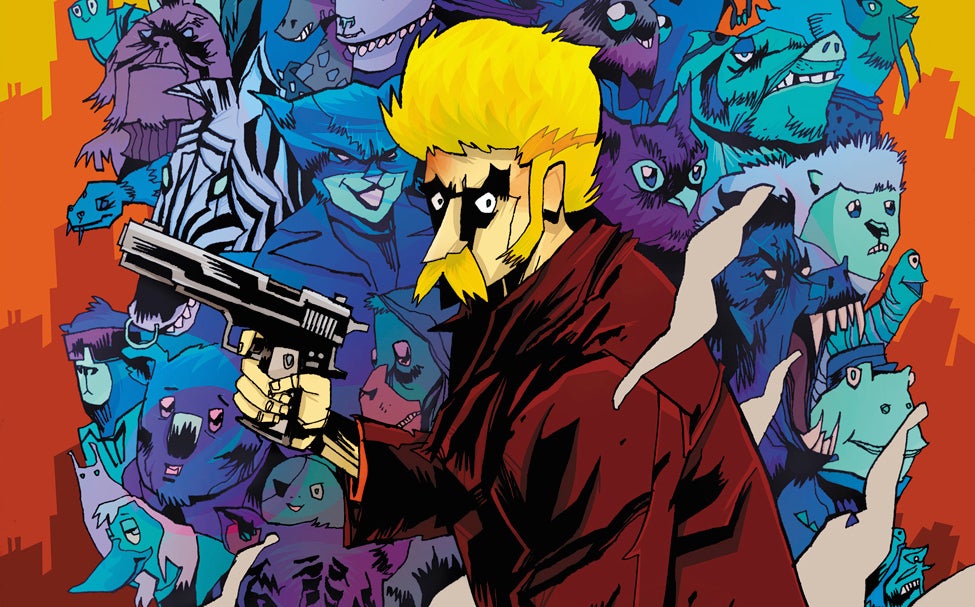 During the Chicago Comic and Entertainment Expo today, Marvel Comics has announced Howard The Human #1, a Secret Wars one-shot written by Skottie Young.

The story will find Howard, formerly a Duck, as a human being. What's more, Howard will be the only living homo sapien in a city filled with animals. Talk about a role reversal. But that doesn't mean Howard will have a ho-hum adventure. The former fowl will see plenty of cases as a private investigator, all while dodging bullets and crossing paths with a murderous anthropomorphic animal. Or, as Howard calls it, Monday.

ComicBook.com was able to catch up with Young about Howard's animal kingdom crossover. Below, Young explains the one-shot's connection to Secret Wars, his foray into comics writing, and working with series partner and illustrator, Jim Mahfood.

Young: It's been really really fun. It's a whole different creative challenge that I was nervous to take on at first, but it has ended up being way more rewarding than I ever thought that it would be. I think when it comes down to drawing, there's a certain level of ability that I have or anybody has in any one day. No matter your desire to push beyond that, you are as good as you are. You can hit that and it's going to take a lot of time to push past that. Writing is the same way in some ways, but it's a little bit easier to try to figure out when I did something wrong; even the day before. Where did I go wrong with this?

For example, if I'm drawing and I show it to someone and they're like, "That torso is like really long." Or "The perspective in this just isn't working and this composition is off." Telling me that is one thing, but then it can be very challenging to figure out how to fix that. I might not know how to fix that perspective. That's the best I can do.

But on the the writing front: If something comes back to me and the editor says, "Hey, I don't think Rocket's making enough of his own decisions here. The situation is dragging him along. He's not choosing to do these things." That's a note that I get and I'm like, "You're right." I'm not letting my character decide where to go. He's not in control. That's a note where I can instantly realize the mistake that I made and go back and  can fix that. I know how to fix that, because all I need to do is be shown that.

There's equal amount of challenges there, but I find it less cumbersome to fix when they pop up. There's a real sense of accomplishment there for me. Having an idea, typing it out, seeing the words. That's it. There, the idea's now alive. From that point of view, it's been really fun. I feel that I've definitely grown over the course of it. I've experimented here and there, and learned from the and bumps and scrapes along the way. It's been a blast.

Now that you've been writing, have you seen any fans say that they prefer your writing over your art?

Skottie: I haven't seen that. I've seen a few people say, "I wasn't a fan of his art before."  I haven't seen anybody be super vocal about liking my writing and not my art. I have seen a decent amount of people be like, "Wow, I really like this writing." Because I think that was a hurdle that I had to get over too.

Skottie: It's just people assuming that, which is a weird assumption. I've talked about this recently. It's a weird assumption that just because somebody may know you for drawing, they think  that you can't do the other stuff. At the beginning, I started off as a penciler and somebody else's inking. But it wasn't because I couldn't ink. It was  because for whatever reason that was the system set in place.

It was just a matter of me going, "Hey, I like ink anyway so I'm just going to do this." And they're  like,  "Well, can you?" I was like, "I think so." And then they say, "Oh yeah, you can. Sure, go ahead." I think writing was the same way, where it's like none of us are great at what we do right out of the gate, but after years of drawing and reading a million scripts and telling stories and watching movies and reading books, you get better. At some point, all this stuff is going to click. You're going to be like, "I think I want to try this too."

So, set up Howard the Human for fans who are heading into this and seeing the headline, scratching their head, being like, "What is this?" What's the pitch?

Skottie: The pitch is ... What is the pitch? [Laughs] Howard is not in a man's world. Howard is the only human that lives in a world full of animals. This is a one-shot, so there's a challenge. I think one-shots are far more challenging than a full-blown mini-series or on-going. You really have to tell a tale in a very condensed amount of time and make sure that everybody has fun. You don't waste too much time on this or that.

So, Howard the Human is really just a day in the life of a private detective human in an animal world and what that involves. It's about a guy who doesn't really enjoy his life that much, because he's such an outcast. There are things that he wants to enjoy that he can't while living in an animal world, like eating eggs for breakfast. Because in a world of all animals they don't really allow that. He would do anything to just be able to wake up and have some eggs and bacon. In a world of all animals, that's kind of cannibalism. He can't do that. There's that, and the other part of the pitch is that I've got a secret weapon and his name is Jim Mahfood.

Mahfood is someone who you've been praising for as long as I can remember. I know he's always someone who has been on your radar and someone you've always wanted to work with. What's it like to finally make that magic happen?

Skottie: Oh man, Jim is just awesome. We've been friends for a long time. It definitely started off as me just being a fan of him. I worked an office job and waited tables when he was putting out Girl Scouts. It was a comic. I looked up to him a lot, because I thought "Here's a guy that's around my age and he's putting out hip-hop inspired, kind of hippie comics in the comic book world and it's what I want to do." Just growing up and admiring his hustle and all the kind of stuff that he put out. We became friends over the years.

He was the first person that came to mind when they asked me to do Howard the Human. It came out of the retreat. We were throwing out titles or whatever and I was like, "I'll grab that," thinking that it was a throw-away. I think Tom Brevoort maybe even thought that it was just a cool title, but it probably will go nowhere. It almost ended up on the X-list. I was like, "I think I could do something with that." The he was like, "Now I'm really interested."

As soon as that got on the board, I instantly thought of Jim, because his flavor for the city atmosphere and really wacky characters and attitude. I thought it would be a perfect fit for a book like this. He was the first person I asked. I thought there was no way he was going to say, Yes. He's busy and does a lot of stuff. So it really was a pipe dream for me to put his name on the list and let alone get him first call.

Skottie: I don't want to ruin the story, but there's nothing really to ruin. It's Secret Wars in the way that Secret Wars is giving us the chance to tell a lot of big stories that are very integral to the main crux of it all. Then we're also getting to tell a lot of tales within this world.  Howard the Human is one of those stories where there's a part of this world that exists, and it doesn't know anything else but what it is. That's about as Secret Wars as this one gets for me.

So Namor and Black Panther don't show up and say, "All right, this world's got to go. I hope you had your fun, everyone."

Yeah, it's the beauty of what I've been able to do. Marvel's just let me have fun in my little corner of the Marvel Universe. They know where my strengths are and they allow me to just go have fun with that. They're not being like, "You know what? We're going to have to make Skottie really lean into this, massive thing and make it a really important." They know that I'm going to do something a little different, and I'm probably going to lean into the humor side of it a little bit. We're going to have a little bit of fun.

It's okay to have some of those fun comics floating around too, to be the lighter side for some of the heavier content that the other guys are carrying. I think you see that with what I'm doing with the Rocket Raccoon stuff. Rocket was like that even when the other guys, Sam and Brian, were doing Black Vortex. It was a little mini event at Marvel, a little crossover. It wasn't a situation where I could have jumped in if I wanted. They invited me, but it wasn't a situation where I had to take Rocket over and attach it to that. It was alright that the existed book outside of that circle. It still fits in there, and within the Marvel Universe, but it doesn't always need to be so heavy and entrenched in the whole machine. 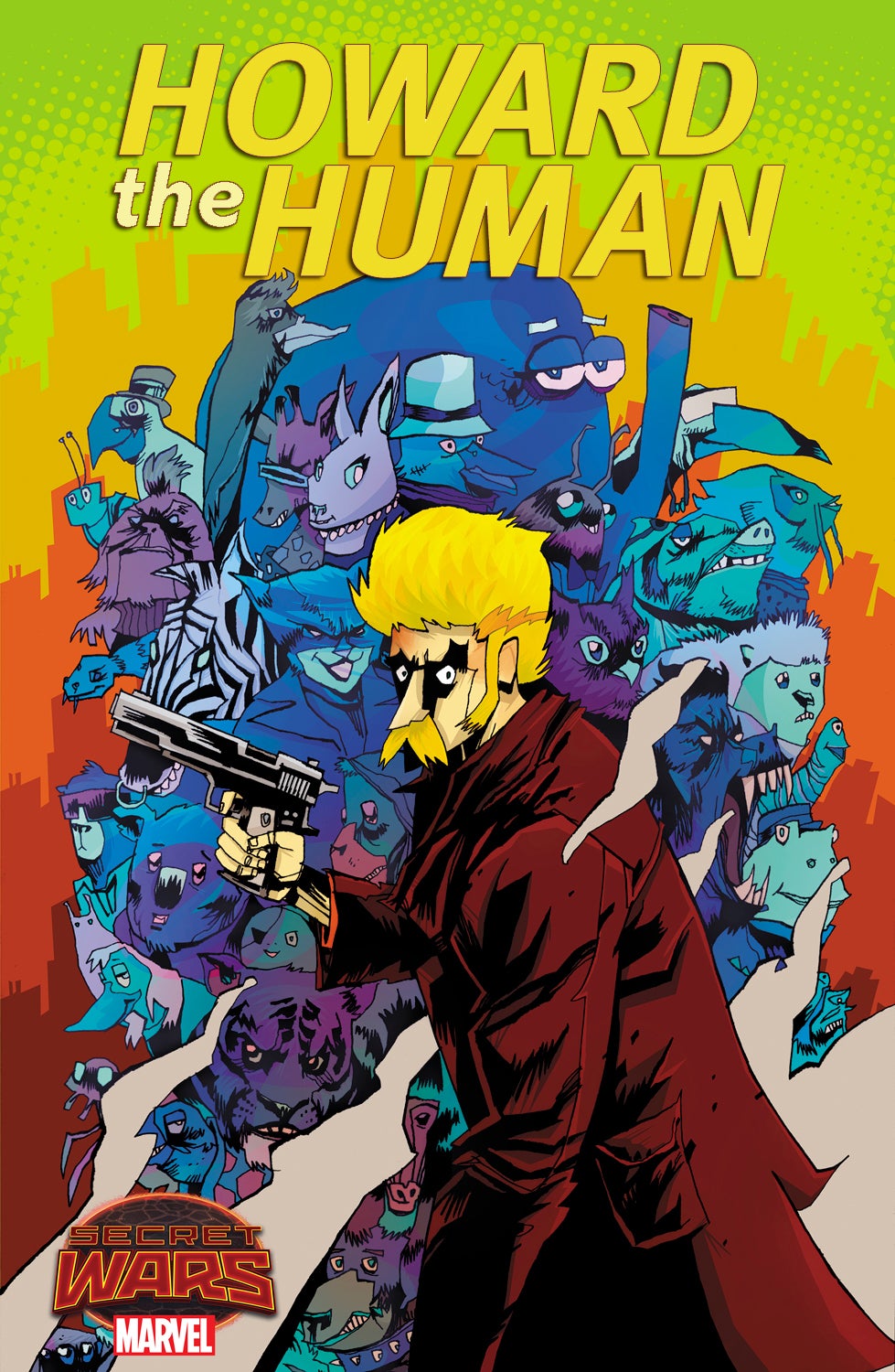