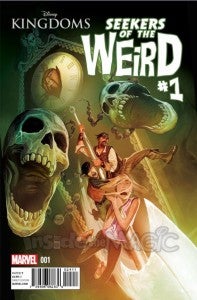 According to Inside The Magic, Marvel Comics and Disney are partnering on a new comic book line that will be published under the all-new Disney Kingdoms banner. The Disney Kingdoms comic book line will feature stories inspired by the "existing beloved lands, attractions, characters, and worlds of Walt Disney Parks and Resorts." The line was previously teased at the 2013 Disney D23 Expo.

Seekers of the Weird will be a five-part series written by Brandon Siefert with art by Karl Moline. According to Inside the Magic, "The story follows teens Maxwell and Melody, thrust into a thrilling race through the world’s strangest and most dangerous museum when their parents are kidnapped. Together, they join forces with their mysterious and swashbuckling uncle as they attempt to rescue their family and save the world from an evil secret society. Along the way, they just might discover the truth behind their wild and weird destiny."

Disney Kingdoms: Seekers of the Weird will be discussed on Saturday at New York Comic Con during the Cup O’ Joe panel.