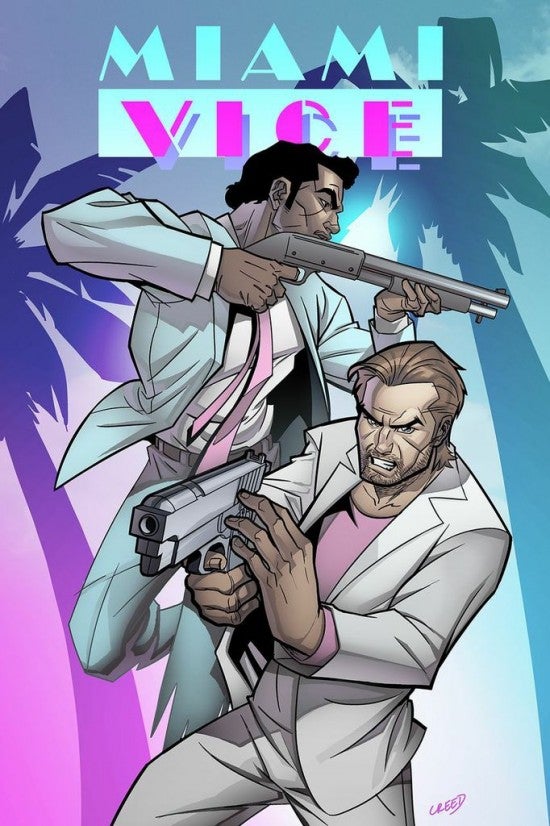 Lion Forge Comics todaylaunched a new digital comic based on the 1980s cult classic TV show, Miami Vice. The St. Louis-based publisher acquired licensing rights for the timeless property from NBCUniversal Television Consumer Products in 2013. Lion Forge launched digital comics for Airwolf and Knight Rider last fall to kick off its collection of nostalgic NBC titles. The publisher also debuted digital comics for Saved by the Bell and Punky Brewster in early February. Miami Vice, which aired on NBC from 1984 to 1990, quickly became a pop culture phenomenon that epitomized the decade's style. Lion Forge transitions the iconic TV program into the digital comic realm, packing in all the heat and speed of the original South Beach "to the max." And, yeah, like everybody else they're going to pretend the Jamie Foxx/Colin Farrell version never happened. In Lion Forge's digital comic rendition, detectives Sonny Crockett and Ricardo "Rico" Tubbs of the Metro-Dade Police Department are back in action, revisiting the crime-ridden streets of Miami in true 1980s fashion -- with no shortage of speedboat chases, Armani jackets and, of course, fast cars. "The stories for Miami Vice take place during the original era and are a combination of the TV episodes plus new material," said Shannon Eric Denton, senior editor, Lion Forge. "Everyone involved with this title are huge fans of the show and have poured their hearts and souls into it." Writer, producer and award-winning director, Jonathan London, writes Miami Vice. London has an extensive background that includes working with Hulu for its web series Singledom and When Ninjas Attack. Currently, he is the editor-in-chief of the popular news network Geekscape. Art is provided by Brazilian illustrator Geanes Holland. "The digital comic medium allows us to really dig in creatively so that fans enjoy Miami Vice for the visual masterpiece that it is," said David Steward II, founder and CEO of Lion Forge. "Also with a digital format, readers can relive and share with their friends the glory days of the 80s from the convenience of their smartphones or tablets." "'Miami Vice' was a groundbreaking show. It combined art and entertainment in ways that had never before been seen on TV," said Chris Lucero, director of Global Consumer Products Licensing, NBCUniversal Television. "We are excited to see the response former fans and new readers have to meeting Crockett and Tubbs in digital form." Miami Vice is available now via the Amazon Kindle Bookstore. It will be sold through ComicsPlus, Google Books and other e-book stores in the coming weeks.