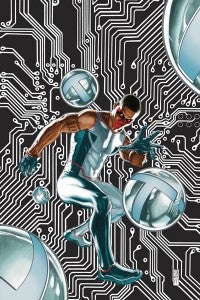 The character of Mister Terrific has always been one that I found to be quite underused and a mystery to those who haven't seen him outside the confines of the Justice Society of America. Deemed "the third smartest man" in the DCU, Mister Terrific, AKA Michael Holt, is one of the more scientifically inclined characters out there, and this new solo series explores that side thoroughly in this first issue. This character was also one that I was surprised received his own series, and frankly, he deserves it. With so many characters and stories to juggle in the various JSA series over the years, it's hard to give every character a focus in every issue or even every story arc. He may deserve this series, but the big question is how does this maiden voyage present him? Oddly enough, it's a mix of humor with some dark tones thrown in as well that works despite some strained and preening dialogue. A chase across the rooftops of London opens up this issue, with Mister Terrific hoping to expose a corporation's foray into weapons making and manufacturing. Eric Wallace crafts a story that runs smoothly and is able to effectively weave the past with the present, giving a sensible origin tale alongside developing drama and action for a new series designed to hook readers into a character they not have seen before. After dealing with the situation in London, we are shown the terrible tale of his past, with death looming a large shadow over Holt's life, causing him to not only reject religion, but throw himself into science and his work as well. It's a dark turn from the happy-go-lucky tone just seen previously, but it makes sense if Terrific is masking his pain with this work and identity. His encouragement to continue his work and development of science in order to help the world comes from a strange visitor, his would-be son. He continues to develop his work and his love of science, and with that, his industry grows as does his work as Mister Terrific. The story's narrative works as a whole, but there are a few spots where the dialogue seems a bit hokey and over the top. An example comes when Mister Terrific meets with the L.A.P.D. to examine a mysterious piece of evidence relating to an everyday man with a community college education killing a homeless man after scribbling down very advanced math calculations. Announcing how great the idea he had to give the L.A.P.D. a way to contact him is forced and doesn't fit. His dying wife's plea for him to continue his work feels ham-fisted as well. Despite that, the issue works. A dangerous villain named Brainstorm appears in the issue, commandeering people's minds, and Holt is not immune either, as the final dramatic pages show. Issue two looks promising, and Gianluca Gugliotta's pencils are sharp, slick and give Mister Terrific an edge he needs for a book of this tone. Terrific book indeed. Grade: B+