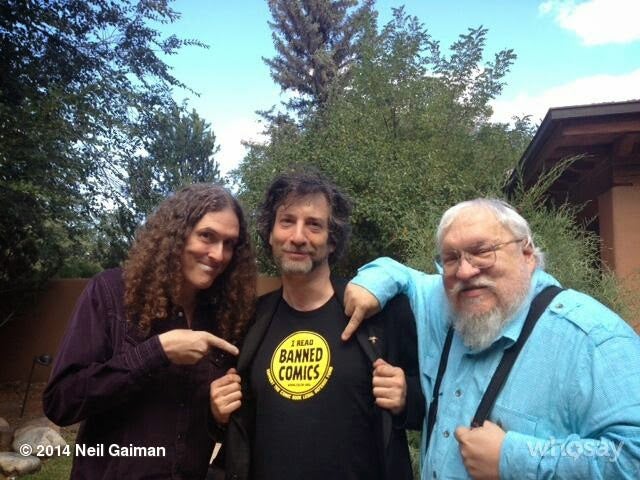 It's that time of year, that everyone starts talking about banned books -- and in the comics industry, where we've been saddled with the stereotype that the whole art form is "for kids" for about three quarters of a century now, that means a lot of talk about banned comic books.

One guy who's occasionally found his "mature readers" titles on lists of banned titles is award-winning, best-selling writer Neil Gaiman, who is of course now widely regarded as one of the greatest living graphic novelists (in addition to being a best-selling novelist and a screenwriter of some repute).

Earlier today, Gaiman posted an image to Google+, bringing various corners of the geek ecosystem together in support of banned comics: as you can see above, musician "Weird Al" Yankovic (whose UHF is getting a 20th anniversary re-release later this year and whose Mandatory Fun back in July marked the first time in his decades-long career that he topped the Billboard charts) and novelist George R.R. Martin (whose best-selling Song of Ice and Fire series is the inspiration for the acclaimed HBO mega-hit Game of Thrones) joined Gaiman for a quick photo.

The Comic Book Legal Defense Fund, a First Amendment organization serving the comics community, has a number of banned books events set up for the coming week -- you can see a full list here.

The Comic Book Legal Defense Fund Liberty Annual comes out from Image Comics on October 8. You can bookmark its spot on the Image website to buy a digital copy when it's released, or check back with your retailer next month.