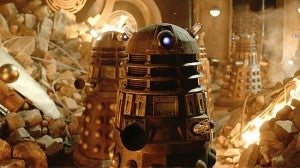 reports that the BBC will announce the name of the next star of Doctor Who this weekend.

According to the fan-run (but usually reliable) news site, "A special programme on will air this Sunday 4 August at 7pm on BBC1 entitled Doctor Who Live: The Next Doctor. A deliberate disposable repeat of Celebrity Mastermind is currently listed in the timeslot. The show is going to be filmed in front of a live studio audience with Zoe Ball unveiling the next Doctor. The show will also feature interviews with past Doctors and companions."

The BBC are reportedly expected to confirm the existence of Doctor Who Live: The Next Doctor at midnight local time, or 7 p.m. EST. If it happens, we'll let you know.

Matt Smith will wrap his run as the Eleventh Doctor during this year's Christmas special, when the new Doctor will be seen onscreen for the first time.

New Doctor Who Said To Be Announced This Weekend