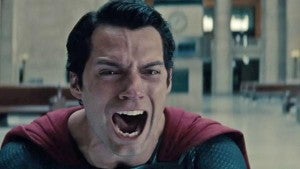 Just moments after panelists at New York Comic Con watched an animated short that will accompany Man of Steel on Blu-ray and DVD next month, a fan asked them to respond to the film's controversial ending and to appraise whether they had a problem with the darker, more brooding and violent Superman being the definitive media interpretation of the character for many fans.

"It’s the most controversial thing in the movie," legendary Warner Bros. animator Bruce Timm said, noting that when he first saw the script he knew that it would be controversial but he didn't know how much outcry there would be. "I don’t really have a problem with it. I actually thought it worked."

He added , "I understand that Superman has to have that no killing policy, even though I think it’s outdated."

"It didn’t bug me either," longtime Superman group editor Mike Carlin told the fan. "We actually did something similar in the comic books. My only problem with it is that if Superman was going to kill General Zod, why he didn’t do it sooner before a couple city blocks were destroyed."

He noted that  when they told that story in the comics, it was followed by a long tale about the consequences--what killing someone meant for Superman, what it did to him, and how people reacted to a Superman who was willing to kill. That story, Exile in Space, is available in trade paperback and, among other things, introduced The Eradicator.

"I’m still trying to figure out what those people were still doing in the train station with the whole city being destroyed," joked DC Co-Publisher Dan DiDio.

Later Bruce Timm said, “It seemed like a really, fresh modern interpretation of Superman. That was my big takeaway from the movie.”