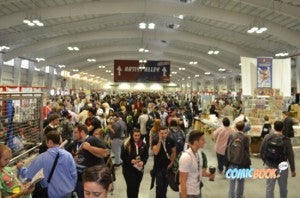 Last night, ComicBook.com was among a number of news outlets reporting that New York Comic Con was tweeting using the accounts of attendees.

When fans and creators synced their badges to their social media accounts, they had to sign off on a page that said, basically, that New York Comic Con could use their Twitter account to post things. This isn't unusual verbage, but it's rarely actually used; typically, the authorization you give is used for behind-the-scenes things like collecting your demographic information, and it's rare that an organization will actually tweet out advertising using your account.

That's just what the convention did last night, though, to the frustration of a number of those who felt they'd been "hacked."

Reached for comment, ReedPop (who organize the show) stopped short of admitting any wrongdoing, but did confirm that they've terminated the unpopular practice.

"As you may have seen yesterday, there were some posts to Twitter and Facebook issued by New York Comic Con on behalf of attendees after RFID badges were registered," a representative for Reed said in a statement. "This was an opt-in function after signing in, but we were probably too enthusiastic in our messaging and eagerness to spread the good word about NYCC. We have since shut down this service completely and apologize for any perceived overstep. Please accept our apologies and have an absolutely excellent time this weekend."