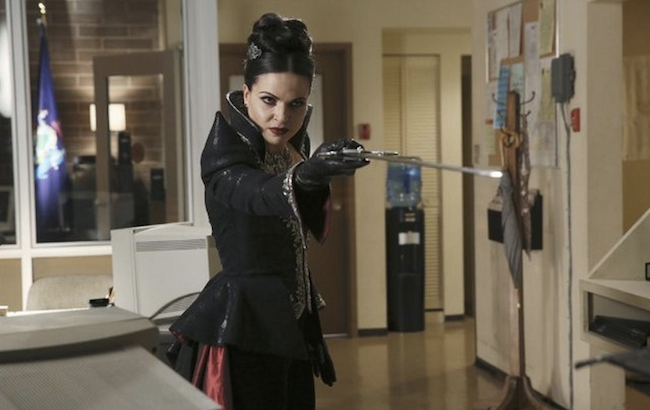 Once Upon A Time opens in 1982 Boston, where the Ingrid the Snow Queen (Elizabeth Mitchell) began her journey to find Emma. She goes to a psychic, only to become furious that she could not even predict Emma’s name.

In present day, the Spell of Shattered Sight has swept over Storybrooke, turning everyone against each other, except Emma, Elsa, Anna, and Rumple. Mary Margaret (Ginnifer Goodwin) and David (Josh Dallas) mock each other in a biting exchange, and Kristoff (Scott Michael Foster) tells Anna (Elizabeth Lail) that he doesn’t want to get married anymore.

Suddenly, Anna remembers a story about the Spell of Shattered Sight and how it was stopped – by killing the spell-caster. Emma (Jennifer Morrison) and Elsa (Georgina Haig) leave baby Neal with Anna and leave to kill Ingrid.

Regina (Lana Parrilla) is trying to escape the vault that she locked herself in for safekeeping and becomes furious at Emma. She changes into her Evil Queen outfit, circa earlier seasons.

At the pawnshop, Rumple (Robert Carlyle) summons Killian (Colin O’Donoghue), who was unaffected by the spell since his heart wasn’t in his chest. Rumple plans to take Belle and Henry to New York City once he breaks the dagger curse, where he will tell them that the Snow Queen killed everyone else. Rumple demands that Killian find Henry, who’s been hidden by his mothers.

Ingrid retrieves two hidden purple objects from her ice cream shop and is met outside by Emma and Elsa. They immediately try to attack, but the incredibly strong love within the ribbons prevents them from harming her.

Next, a flashback shows young Emma (Abby Ross) when Ingrid was her foster mother. She is bullied by another boy in the house and is about to run away, when Ingrid tells her that he has extreme arachnophobia. 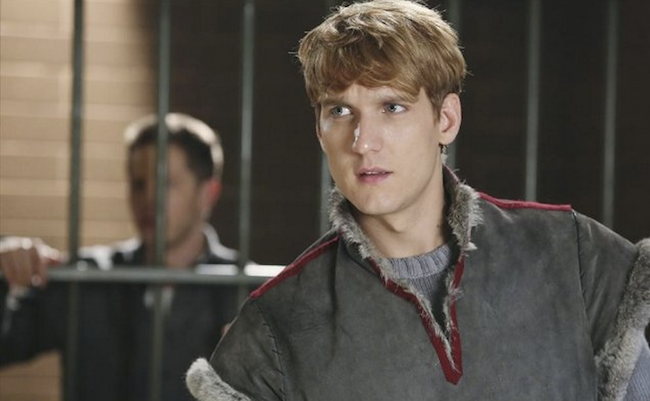 Back in present day, Emma and Elsa try to cut off the ribbons with various magical objects at the pawnshop, but nothing works. Emma reasons if amplified love can keep the ribbons from breaking, maybe only amplified hatred can destroy them. Of course – there’s only one person capable of such hate: Regina, towards Emma Swan.

Ingrid fumbles around with one of the purple objects, suddenly reminiscing. We see young Emma again with her foster mother Ingrid, trying out the crane game at a carnival. As the two bond, Ingrid begins to cry. She is adopting Emma, and neither of them could be happier.

Killian finds Henry (Jared Gilmore) at home, but Henry won’t come out. The pirate eventually breaks in with magic after a few insults from Henry, but he slips on marbles and Henry runs away. On Killian’s way out the door, he runs into Will Scarlet (Michael Socha), who’s ready for a fight. Killian knocks him out.

In another flashback, young Emma jokes with Ingrid about wishing she was Harry Potter, and Ingrid decides it is the perfect time to reveal just how close to Harry she is. Ingrid grabs Emma’s hand and makes her stand in front of a speedy car, causing Emma to freak out and run to the side. Ingrid tries to tell her that she thought the near-death experience might’ve revealed her magic. Emma is distraught that the woman who wants to adopt her is completely crazy, so she runs away.

Emma and Elsa head to Regina’s vault, which Emma successfully unlocks to find Regina waiting. Emma enters with small insults, prodding at Regina, eventually building up to hurtful lies about Robin Hood and Marion. Regina anger makes it possible for them to break the ribbons, and they escape. Eventually, Regina shows up at the police station where Anna and the others are passing the time with harsh words.

Regina declares she is going to take baby Neal away. When Anna tries to stop her, Regina lifts a hand, and with a snap and a poof of purple, Anna and Kristoff disappear. Regina puts a sword in Mary Margaret’s hand, ready to fight to the death.

Emma and Elsa meet Ingrid at her lair, showing her that they’ve destroyed the ribbons. Ingrid explains that the purple objects she’s been fumbling with are Emma and Elsa’s good memories of Ingrid that she took from them. They loved her once, according to her, and she plans to return those memories to prove it. 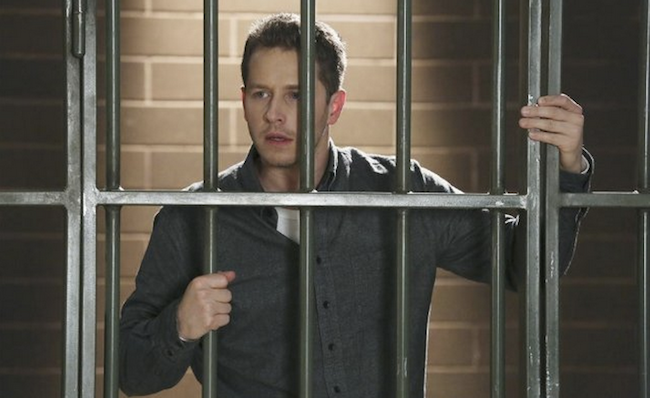 In yet another flashback, this time from 2011, Emma is shown meeting Ingrid at the ice cream shop, but she’s furious. The last time Emma saw her was when Ingrid pulled her in front of the car. When Emma threatens to call the police, Ingrid uses one of the purple memory things to take away all of Emma’s memories about her.

Back to the swordfight – where the two seem pretty evenly matched. Swords are eventually put aside and a full-on brawl begins over arguments and sore spots from decades ago.

Anna and Kristoff appear at the beach, where Kristoff is still rambling about breaking up with Anna. When he’s about to physically leave, she decides to knock him out with a bottle in the sand, thinking he’ll thank her later. Turns out, the bottle she hit him with was the bottle that her mother wrote a letter into long ago, which had floated onto the beach. Anna reads it and begins to rejoice, saying she must get it to Elsa immediately.

Back at Ingrid’s, Emma is about to attack when Anna appears and tells them to wait. Their mother’s note came over with them in the portal, and it details how their mother not only feels bad about wanting to change Elsa, but also she regretted putting Ingrid in the urn. She loved Ingrid. The letter has a crystal with all of the memories of the sister, directions to find and free Ingrid, and to tell Ingrid that she always loved her.

Ingrid believes Anna to be lying, and holds her in a magical chokehold, but Anna insists, gasping, that she will not give up on her. Once Ingrid lets Anna go, she summons the memories of her sisters from the bottle. Ingrid realizes that everything has been a mistake. She knows that the only way to fix everything know is to kill herself, against the girls’ wishes. She grants them their memories back and disappears in a torrent of crystals. Now that she has her sisters’ love, she is ready to join them.

Elsa and Anna decide that they must retrieve the memories of the sisters and restore them to the people of Arendelle, which is their mother’s remaining unfulfilled wish. Meanwhile, all throughout Storybrooke, the curse breaks, as all of the residents begin to laugh at the absurdity of their situations. Apologies and smiles abound, families return to each other, and kisses are shared.

The episode ends when Killian tells Rumple that he failed to retrieve Henry. Rumple threatens Killian with death, since he was unable to kidnap a teenage boy. Rumple says that once he leaves, he will leave Emma and the others of Storybrooke alone, as long as they never get in his way. He can’t make the same promise for the rest of the world.

Once Upon A Time Season 4 Episode 10 Recap With Spoilers: Shattered Sight

One Piece Creator Reveals a Touching Fact About His Fan Mail